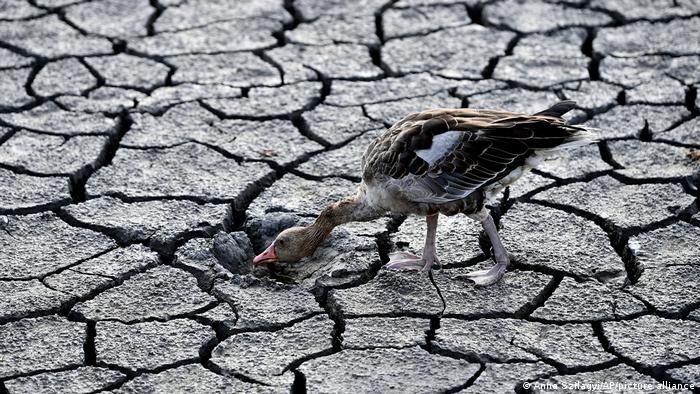 Much of Europe and the Northern Hemisphere is battling either wildfires, low water levels, harvest warnings, water use restrictions or a mixture of all these.

Around much of the Northern Hemisphere, from Hungary to Hawaii, from the drying Rhine River to the now-recovering Rio Grande, or from Casablanca to California, summer droughts and high temperatures are having a serious impact on everything from agriculture to the freight industry.

Here's a rundown of some of the latest drought-related developments from around the world, plus a window to more bespoke coverage on DW. We will continue adding to this story after publication.

The president of the German Farmers' Association, Joachim Rukwied, warned on Thursday that without imminent rain, this year's harvests could be severely affected by the late-summer heat wave.

He added that the combined issues of inflation and the conflict in Ukraine were exacerbating the situation even for farmers in Western Europe, hundreds or thousands of kilometers from the front lines.

"At the moment we are fighting on many fronts," Rukwied told German news agency dpa. "Fertilizer prices are four times higher than they were a year ago. Energy prices are twice as high. Feed prices have risen."

Rukwied said that "if it does not rain thoroughly and soon, then we fear harvest yields could be reduced by as much as 30% or 40%."

The 2022 grain harvest was proceeding largely according to plan, Rukwied said, but crops harvested later in the year such as potatoes and sugar beet were at particular risk and end up costing more as a result.

Rukwied also warned of the effect on farmers' own winter reserves. With grass in much of the country brown — "absolutely nothing is regrowing" — some farmers were already having to feed livestock from stocks set aside for winter, as they are unable to cut any fresh food from fallow fields.

Firefighters from six EU members started to arrive in France on Thursday to help battle a series of wildfires, most notably a fierce blaze in the southwest that has forced thousands from their homes.

In total, 361 foreign firefighters have rushed to the aid of their French colleagues, the first contingent of 65 arriving from neighboring Germany.

In the southwestern Burgundy region, the Tille River in the village of Lux dried up completely, revealing thousands of dead fish in a wide trench.

France has been forced to impose various water usage restrictions nationwide during the summer.

The conditions are also affecting the nuclear-powered country's electricity supply. France's vast fleet of low-carbon nuclear power plants rely on river water for cooling, and several plants have had to be shut down as a result. France has taken the unusual step of importing electricity from its neighbors, and its baseload electricity price hit a record high earlier in the week.

Water levels on the Danube River have been dipping toward critical levels in recent weeks, while parts of Lake Velence, to the southwest of Budapest, dried up entirely this week.

The deputy governor of the Hungary's central bank, Barnabas Virag, has warned that the lengthy period of drought, coupled with the impact of the war in Ukraine on global food supply, could push food prices higher in the coming months and exacerbate the existing inflationary pressures facing the country.

Ever wondered how wildfires start, and how we try to combat or contain them? Our Environment team takes a look at some of the cutting-edge and even counterintuitive methods available.

In the Netherlands, dikes often made of peat protect the low-lying country's agriculture and homes during times when water's more plentifully available. But these structures are also at risk in the extreme heat. Find out why.

Spain might be no stranger to hotter summers by European standards, but it too is facing temperatures and water levels that threaten some of its core crops like olives and avocados. Here's more from Madrid from DW's Ralph Schulze.

It was World Hepatitis Day recently. Most people would think of this as a sexually transmitted disease, likely owing to experiences with either hepatitis B or C. But hepatitis A and E are waterborne and are much more common in parts of the world with poor sanitation. Both droughts and floods can increase the risk of outbreaks. Here's why.

Returning to Germany, one core focus of the drought is the Rhine River, which ultimately connects the Alps with the North Sea. Europe's second-longest river after the Danube, it is also a core shipping lane for western Germany. It is still open to freight traffic for now, but already boats are unable to run fully laden. Germany's Federal Institute of Hydrology warned on Thursday that without rain, one notorious shallow point on the river could become completely impassable next week.