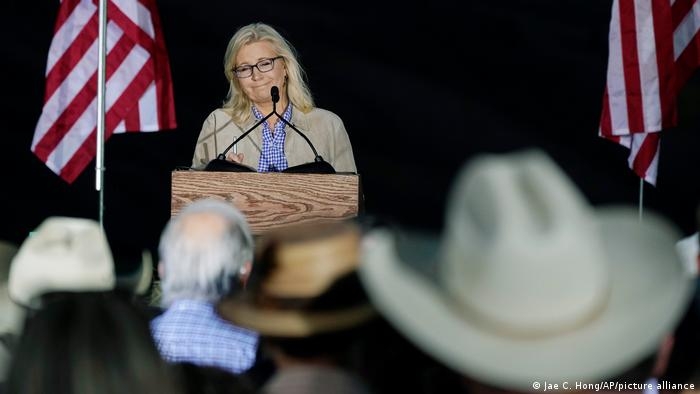 Election conspiracy theorist Harriet Hageman's rout of Cheney was a testament to former President Donald Trump's influence in the US Republican Party.

Election conspiracy theorist Hageman's rout of Cheney was also a testament to Trump's grip over the party's fortunes and an achievement in his campaign to oust Republicans who backed impeaching him after the January 6, 2021, riot at the US Capitol .

Cheney, a three-term congresswoman and one-time upcoming star in the party, was one of just two Republicans on the House panel investigating the attack on the Capitol by a mob of Trump supporters.

In her concession speech, Cheney alluded to a political future beyond Capitol Hill that could include a 2024 presidential run, pitting her against Trump.

"Our work is far from over," she said. "I have said since January 6 that I will do whatever it takes to ensure Donald Trump is never again anywhere near the Oval Office — and I mean it."

Cheney's criticism of Trump and her role in the congressional panel investigating the January 6 attack made her a pariah in her party.

Her third and final Congress term ends in January. She will continue in her leadership role on the January 6 attack panel until it dissolves at the end of 2022.

Who is Harriet Hageman?

Hageman is a ranching industry attorney who previously ran unsuccessfully for governor of Wyoming.

Endorsing Trump's conspiracy theories, she falsely claimed the 2020 election was "rigged," a statement that appealed to Trump loyalists.

Her campaign was built around how Cheney had done "nothing to fight for the people who are suffering" and instead focused on "the illegitimate January 6 committee."

"Obviously, we're all very grateful to President Trump, who recognizes that Wyoming has only one congressional representative and we have to make it count," said Hageman.

Trump has his say

Meanwhile, Trump basked in Cheney's loss saying on his Truth Social platform, "Liz Cheney should be ashamed of herself, the way she acted, and her spiteful, sanctimonious words and actions towards others."

In all, 10 Republican House members backed Trump's impeachment following the January 6 insurrection. Only two of those 10 House members have won their primaries this year.