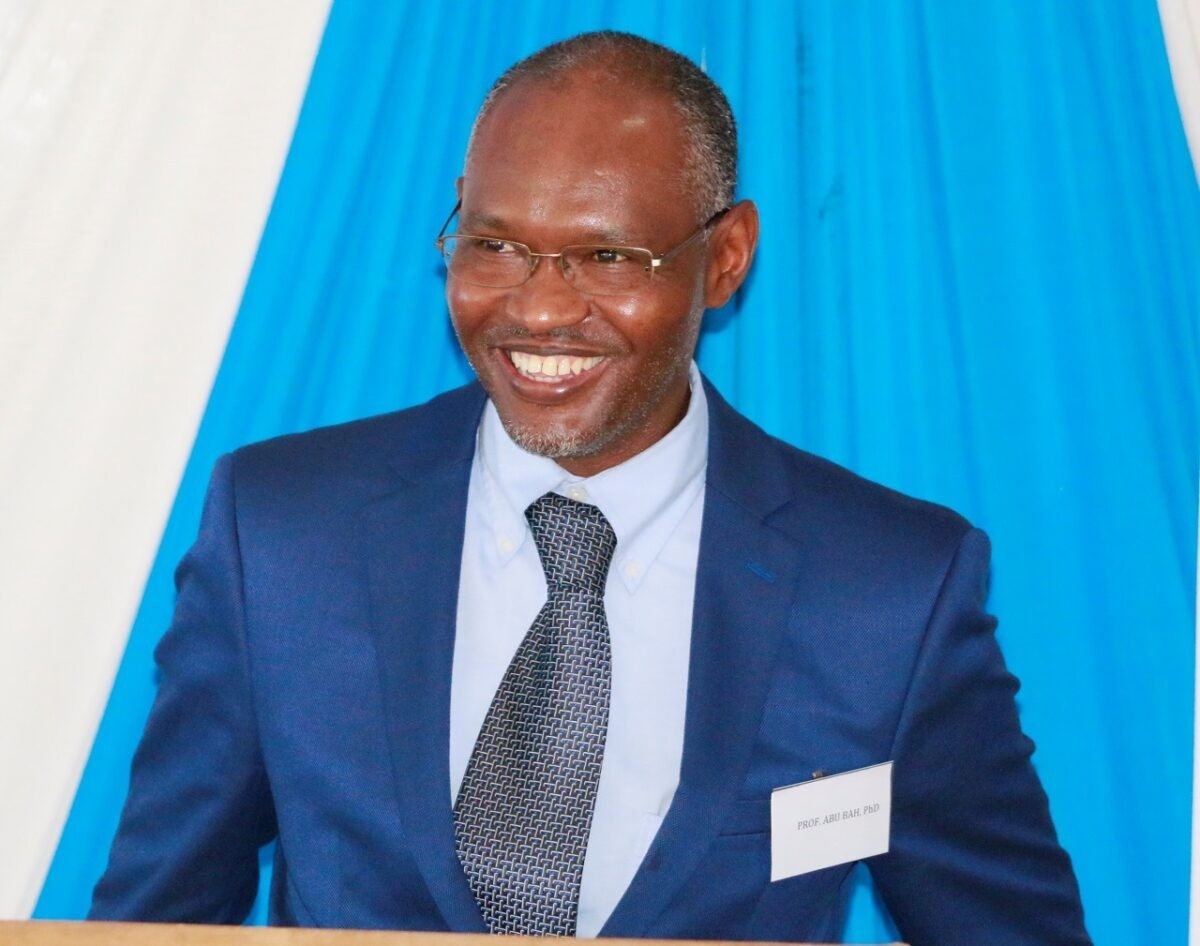 Dr. Abu Bakarr Bah, Presidential Research Professor at Northern Illinois University and Editor-in-Chief of Africa Conflict & Peacebuilding Review”. His research focuses on issues of democracy, nation building, ethnicity and the peace-making and peace-building role of the international community. In an interview he answered our questions as the following:-

and this is a link of his personal website: https://www.niu.edu/bah/

Gulan: How do you characterize the situation in the Middle East? And what are the most troublesome trends and worrisome developments undergoing in this region in your perspective?

Dr. Abu Bakarr Bah: I think the situation in the Middle East is problematic from a security standpoint, just as it is in other parts of the world. However, I see three specific troublesome issues, namely the situation in Palestine, the Iran nuclear issue, and democratic governance from both the minority and Islamist angles. The situation in Palestine has become one of the longest running social injustice and humanitarian problem in the world. Continued oppression of Palestinians, irrespective of the roots of the Palestine-Israel conflict, will only breed more violence for both Palestine and Israel. The Iran nuclear issue is a major challenge because it is intertwined with the politics of world powers, notably the United States and Russia. This makes it very difficult to find a workable solution for Iran to exercise its rights within international norms. The democracy issue, especially in Iraq, Syria and Yemen, are complicated by corruption and oppression of minorities which breed more dictatorship and reactionary violence in the form of terrorism warfare.

Gulan: Generally, how do you see the attempts for democratization in the Middle East, especially after the Arab Spring, can we say that the prospects for pushing democracy forward are slim in this region?

Dr. Abu Bakarr Bah:I think the prospect for democracy are not very good. First, there are growing reactionary threats from nationalist and populist movements in the West which create a less favorable global environment for democracy promotion. If we understand democracy to be more than mere multiparty elections, but a system of responsible and representative governance based on the rule of law and respect for minority rights, then democracy is facing problems nearly everywhere, including its original home: the United States of America. This is not to say that we should retreat from democracy or that democracy is bad; it just means that we have to strive for more meaningful democracy – one that rests on the ideals of liberalism and egalitarianism, not racism and other forms of discrimination. Second, Middle Eastern states are contending with issues of state legitimacy – what I mean is that for there to be democracy, there must be a state that commands legitimacy. The legitimacy of some of the states in the region are fiercely contested by minority groups and/or Islamists. Both of these have proved to be difficult to solve – minorities do not get their state but remain oppressed while Islamists totally reject the global capitalist world order that breeds authoritarian and corrupt states in their region. To me the solutions are not in waging more War on Terror or draconian measures against minorities. Rather, there must be room for more pluralism, local solutions, and humanism.

Gulan: Sometimes it seems that the intractable and longstanding conflicts and challenges in the Middle East defy any attempt to resolve them, so why the dilemmas of this region are so insurmountable and seemingly unsolvable?

Dr. Abu Bakarr Bah:That seems right, even though there are longstanding conflicts in other regions too. But yes, the Palestine issue has been there for too long, and the issues in Lebanon, Iraq, Syria, Yemen, and Iran are all complicated. I think one critical factor is geopolitics – the conflicts in the Middle East have been too intertwined with geopolitics and Western interests. This takes away the solutions from the local realm into the realm of the global and American politics. Unfortunately, that is not good – it only undermines peace and democracy. As the primary source of energy, the Middle East has been too central to the interests of global powers, which fuse with ideological issues and special interests, notably in the United States. I think countries in the Middle East need to diversify their economies and build on innovative environmental ideas to make oil less central to their existence, and thereby disentangle the region from the global dependency on its oil. In a way, for it to get peace it has to be a bit less relevant to the global capitalist economy.

Gulan: As you know there are many terrorist and radical groups in the region, that they have caused unprecedented death and destruction, what are the underlying and structural causes for the emergence of these groups and what should be done for countering them?

Dr. Abu Bakarr Bah: As a start, terrorism in all its forms must be condemned and resisted. However, the real solution rests on addressing the sources of legitimate grievances. In every society, there are few extremists who can be very difficult to negotiate with – so they must be fought and defeated. But to broadly label people resisting social injustice as terrorists is a mistake as it does not ensure peace. As I mentioned before, the Middle East has deep challenges in terms of democracy. It seems to me that the roots of terrorism are connected to the issues that make democracy difficult in the Middle East, notably: the corruption tied to the global capitalist oil economy, minority oppression, excessive Western interference, and the fusion of religion (i.e. Islamism) with political resistance in ways that are not genuinely religious but simply based on worldly political grievances. I think the more durable long-term solution is to focus on making Middle Eastern countries less dependent on oil, which will thereby reduce the geopolitical vulnerabilities of Middle Eastern countries. If the problems are reduced to regional and local matters, it will be much easier to find solutions. But at the moment, local solutions are undermined by external interests.

Gulan: There is also another intractable and deep-rooted issue in the Middle-East which is sectarian rivalry especially between Sunni and Shia, how this problem can be dealt with?

Dr. Abu Bakarr Bah: Yes, there is a Sunni – Shia political conflict. However, this issue is relatively minor as compared to the other issues. Also, it is important to note that Sunni – Shia conflicts typically flare up in the context of external and geopolitical manipulations in the Middle East. Clearly, the Sunni – Shia problem mostly revolves around Iran and Iraq in two ways: first Iran’s contentious relations with Sunni Gulf states; and second Iran’s involvement in Iraq. Now, both of these are tied to external geopolitical issues. In a way, United States opposition to the Iranian regime has made the Sunni – Shia divide a bigger problem than it has normally been. As we know, Gulf states are US allies and Iran’s involvement in Iraq is connected to US involvement in Iraq. I think this problem is mostly a byproduct of external involvement in the region. If Middle Eastern countries reduce their dependency on the capitalist driven oil economy, Sunni – Shia conflicts will find workable local solutions.

Gulan: How do you evaluate the Iranian influences in Middle Eastern countries, do you believe that Iran is a part of the problem? Can it be turned into a part of the solution?

Dr. Abu Bakarr Bah:Iran is trying to be relevant in the Middle East and defend what it sees as its sovereignty. Certainly, it bears some responsibilities just as all the other countries involved in Middle Eastern politics – those in the region and the external powers. Iran is not a superpower, may be just a small regional power, so its influence is limited. Its strength lies mostly in the fact that its involvement is within the region and it is in places where it enjoys cultural advantages. In some ways, the so-called Iranian problem is simply a problem of geopolitics. If the broader security issues and oil dependency are properly addressed, it is very likely that there will not be an “Iranian problem.” An Iranian problem exists only because of the Israel-Palestine situation and the need to develop a military deterrent in a region in which Western powers control. The solution to the problems associate with Iran in the Middle East largely depends on normalizing relations with the United States. If the United States and Iran make peace, Iran will most likely cease to be a special problem in the region.

Gulan: Undeniably the Israel-Palestine conflict is one of the most intractable one in the Middle East, and all efforts and initiatives to resolve it have resulted in failure and frustration, so how do you foresee the future of this conflict?

Dr. Abu Bakarr Bah: This is a real tragedy and shame on global morality because it is a situation in which the virtues of humanism have been turned upside-down. As we know the Israel-Palestine issue emanates from the horrible genocide against the Jewish people, but the solution from that genocide has resulted into a horrible situation of indefinite brutal and dehumanizing military occupation of another people – a situation in which the once oppressed has become the oppressor. As a humanity that is a big failure and shame to see oppression inflicted by those who have once suffered oppression. Of course, this is not to say that Palestinians have always made the right choices, but certainly they are the current victims of an externally imposed and reenforced oppression. I think the conflict will continue for the foreseeable future because both sides have dehumanized the other; and Western powers do not have the moral majority to free their citizens from vested interested in politics. I think the two sides need to go back to the “two states solution” and be willing to sacrifice territory. In addition, both sides need to retreat from their existential nationalist dogmas – neither one of them need to die for the other live. There are some small positive signs in the sense that Israel is developing a bit more ties with states in the region – that should be an inspiration for each side to humanize the other. Like other problems in the Middle East, the Palestine-Israel conflict can also benefit from reduced geopolitics and more local solutions.

Dr. Abu Bakarr Bah: In the first place, each effort to normalize human relations is a good thing –let us hope that it helps all the parties humanize the other. It is difficult to pinpoint a single driver, but there is a lot of self-interest and “war” fatigue. Constantly being in a “state of war”—real or psychological— is too much of a burden – so it is good to see small steps toward peace. Whether these normalization efforts are sustainable really depend on the Middle East policies of the US and the actions that spoilers may take. As we know, these normalization efforts are not rooted in a deep agreement over the substantive issues – they still disagree on the fundamentals. So, any small misstep or bad event can undermine the efforts to normalize. I think the states that are normalizing relations with Israel can be conduits for addressing the fundamental issues that must be solved for there to be durable peace.