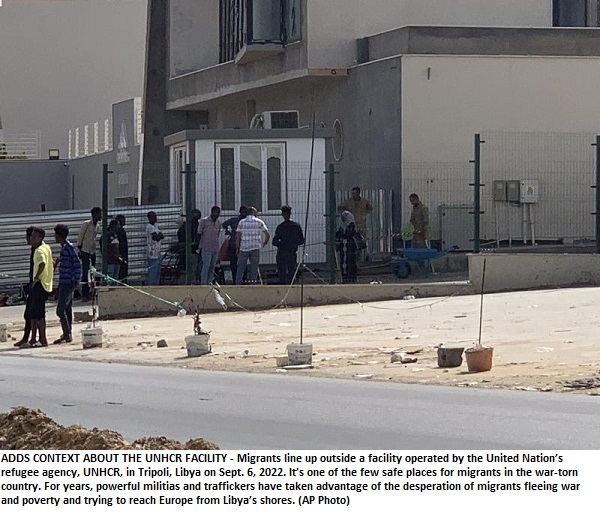 The unseen man pulls the trigger. “Click-click-click!” The magazine is empty, it seems. The man wants to scare him, and it works. The boy flinches with each click.

The boy, Mazen Adam, a refugee in Libya from Sudan’s conflict-torn Darfur region, was kidnapped last week by unknown gunmen demanding ransom. Hours after the video depicting this scene spread on social media, the boy’s father was taken by gunmen from his home in western Libya.

Their saga is all too common in the chaotic, war-torn Mediterranean country, where powerful militias and traffickers have for years taken advantage of the desperation of migrants fleeing wars and poverty and trying to reach Europe. But the abuse is rarely caught on-camera, and the story of the boy and his father has raised concerns among regular Libyans and rights workers.

The video has underscored how abuses, torture, sexual violence and killings of migrants are rampant in Libya, where the European Union is using fragments of the broken-down state as an out-sourced policeman to block migrants from reaching its shores, trapping them there.

Libya has been in chaos since a NATO-backed uprising toppled and killed longtime dictator Moammar Gadhafi in 2011. The country has split into many factions, each supported by rogue militias and foreign governments.

Without a functioning government for most of the past decade, the country became a hub for migrants, with thousands coming in every year from Arab nations or sub-Saharan Africa, aiming to cross the Mediterranean to Europe.

A lucrative trafficking business has flourished and militias, most of which are on the government payroll, are involved at every stage. They sometimes receive payments from the smugglers who arrange the migrants’ journeys. Militias often kidnap migrants and torture them to extort money from them.

Militias are part of the official state forces tasked with intercepting migrants at sea, including in the coast guard. They also run state detention centers, where abuses of migrants are common. As a result, militias — some of them led by warlords the U.N. has sanctioned for abuses — benefit from millions in funds the European Union gives to Libya to stop the migrant flow to Europe.

U.N.-commissioned investigators said last year such practices may amount to crimes against humanity. The U.N.’s refugee agency has warned that Libya “isn’t a country of asylum, nor a place of safety.”

Fleeing Sudan’s Darfur, Mohamed Adam arrived in Libya with his four children in December 2017. A few months earlier, his wife died when their house was set on fire during a bout of tribal violence in Darfur.

Adam settled in Tripoli, waiting for the opportunity to reach Europe. He and his children were registered with the U.N. refugee agency, UNHCR, as asylum-seekers, according to a registration document shared with The Associated Press. Adam found work as a day laborer.

The AP spoke to Adam by phone. A few hours later, he was abducted by armed men in uniform, according to his 20-year-old daughter, Rehab Adam.

He described how in January, despite their recognized asylum-seeker status, the whole family was rounded up in a crackdown on migrants by Libyan authorities. They were held for over three months in a detention center in the town of Ain Zara, where guards abused them and burned their few belongings, he said.

They were released on April 25 after intervention by the UNHCR, he said. They then moved to Warshefana, a town on Tripoli’s southwestern outskirts where living expenses were cheaper.

The town is also home to militias that have been implicated in human trafficking, said Tarik Lamloum, a Libyan activist working with the Belaady Organization for Human Rights.

Mazen, the second oldest of the four siblings, worked also as a day laborer in farms and workshops to help the family survive. On Aug. 30, he left home in the morning for work as usual. But he did not return.

That afternoon, Adam received a call from another Sudanese woman in Libya, telling him that his son was likely kidnapped. The woman sent him the video of Mazen being abused, which she had seen on a WhatsApp group of Sudanese migrants. How the video made it there is unclear, but it’s highly likely that Mazen’s captors wanted it to reach his family to pressure them to send money. Migrants are regularly held for ransom inside Libya’s formal and informal detention centers, although they are usually told to contact family in a phone call.

In the video, Mazen’s captor demands 5,000 Libyan dinars, around $1,000, and tells the boy to call friends or family to get it.

“Is he still alive or dead?” his father, Adam said, speaking hours after the video emerged. “I don’t have the money to free him.”

In response to a request for comment, UNHCR said it was aware of the “distressing video … and is following up on it and in direct contact with the family.”

Lamloum, the activist, says the U.N. agency should have been able to do more to protect the family, whether providing them shelter or hurrying their resettlement abroad, arguing that Libyan authorities in practice don’t recognize the agency’s papers for asylum seekers.

The video was shared on social media by activists in Sudan and by other Libyans worried for the boy’s safety. A day after it appeared, three vehicles pulled in front of Adam’s house in Warshefana. Rehab said armed men got out and took her father away.

No group claimed responsibility for the child’s abduction nor his father’s detention. A spokesman for the Tripoli-based government did not answer phone calls or a message seeking comment.

Now Rehab and her younger sister and brother, 11-year-old Manasek and 9-year-old Mustafa, are at a U.N. refugee agency facility in Tripoli, waiting for news.

“We don’t know where our father and brother are,” she said. “God willing, we will reunite soon,” she said.