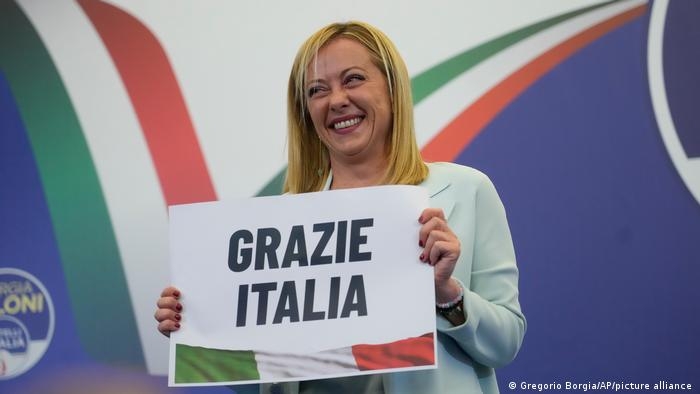 Giorgia Meloni, leading a center-right coalition, is on track to become Italy's first woman prime minister ever and its first far-right leader since Benito Mussolini. The main center-left group has conceded defeat.

The center-right coalition led by nationalist Giorgia Meloni secured a parliamentary majority in Italy's general elections on Sunday, according to exit polls.

"If we are called upon to govern this nation, we will do so for all Italians, with the aim of uniting the people, of exalting what unites them rather than what divides them," she told reporters. "We will not betray your trust."

"This is a sad evening for the country," Debora Serracchiani, a senior PD lawmaker, told reporters in the party's first official comment on the result. "[The right] has the majority in parliament, but not in the country," Serracchiani said.

What did exit polls indicate?

Polls closed at 11 p.m. local time (2100 GMT) on Sunday. Exit polls had shown the alliance, led by Meloni's Brothers of Italy party, securing around 45% of the vote. Meloni's own party had 26% of that by itself, as the strongest single group in the polls.

The center-left alliance, led by the Democratic Party, was the second-strongest bloc, with 29%.

The populist 5 Star Movement grabbed 16.5%, following reports of a last-minute surge in support after a polling moratorium had been imposed.

Some 51.5 million people were eligible to cast ballots. The Interior Ministry put the overall turnout at 64% — far lower than the 2018 election, which had seen a record low turnout of 73%.

The projections indicated that the center-right alliance was winning between 227 and 257 of the 400 seats in the lower house of parliament and 111-131 of the 200 Senate seats.

The center-left alliance, led by the Democratic Party, was projected to have secured 88 seats in the lower house and 42 seats in the Senate.

Who is part of the winning coalition?

Meloni's Brothers of Italy party is in an alliance with the anti-migrant League party of Matteo Salvini, as well as the center-right Forza Italia led by former Prime Minister Silvio Berlusconi.

Meloni campaigned on a motto of "God, country and family." The 45-year-old nationalist has downplayed her party's post-fascist roots and sought to promote it as a mainstream conservative group.

She has rejected accusations of being a fascist, and increasingly toned down some of the more far-right rhetoric.

However, in June, she railed against a so-called LGBT lobby, "mass immigration" and "big international finance."

Although she has been known for her euroskeptic stance, she has abandoned her calls for Rome to ditch the eurozone. Instead, she wants Italy to assert its interests more in the European Union.

How have right-wing politicians in Europe reacted?

"In these difficult times, we need more than ever friends who share a common vision and approach to Europe's challenges," said Orban's political adviser Balazs Orban.

In Germany, lawmakers from the far-right AfD party hailed the right-wing victory in Italy.

"Sweden in the north, Italy in the south: left-wing governments are yesterday's news," she wrote, referring to Sweden's recent election results that marked a significant victory for the right-wing Sweden Democrats.

Last week, von der Leyen said Brussels had tools at its disposal to use if a new right-wing government in Italy fails to follow EU rules. Her remarks were an apparent reference to a mechanism that allows the EU to suspend funding for members that it deems undemocratic.

"No threat of any kind can stop democracy," Bardella said. "The people of Europe are raising their heads and taking their destiny back into their own hands."

What triggered the snap election?

The election came about in the wake of outgoing Prime Minister Mario Draghi's fragile coalition collapsing, as part of a process that began when the 5 Star Movement withdrew its support from the government. Draghi resigned in July, unable to push through an aid package designed to counter inflation.

Italy's complicated electoral system was revised in time for the 2018 elections, meaning that a party or group is no longer guaranteed a majority if it can attain 40% of the vote as was the case beforehand.

Nevertheless, polls from two weeks before the ballot, after which a freeze on opinion polling took effect, suggested that Meloni's right-wing alliance was poised to claim majorities in both houses.

Given the complicated electoral system and the likelihood of coalition negotiations, the first session of the new parliament and formation of a new government is liable to take weeks, as it tends to in Germany after a national vote.