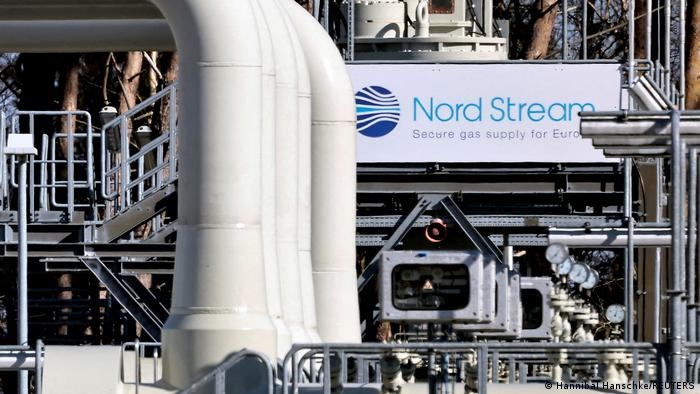 Both Nord Stream natural gas pipelines from Russia to Germany have developed apparent leaks within hours of one another. The cause is unknown, but some sources have hinted at sabotage.

Danish and Swedish officials on Tuesday said two leaks had been identified on the Nord Stream 1 Russia-Europe gas pipeline in the Baltic Sea.

The news came only hours after a similar development on its twin pipeline Nord Stream 2. Both conduits have become flashpoints in the escalating energy war that has sent gas prices rocketing since Russia's invasion of Ukraine.

What do we know so far?

Marine authorities identified a gas leak southeast of the Danish island of Bornholm as the likely cause of the issue affecting Nord Stream 2. Danish officials warned of a threat to shipping in the area and asked vessels to steer clear.

Swedish authorities on Tuesday said there were two leaks on Nord Stream 1 — one in the Danish maritime economic zone and the other in the Swedish one. The two leaks were reported to be very close to one another.

The German economy ministry said it was investigating the incident.

"We currently do not know the reason for the drop in pressure," it said.

Both of the pipelines were built to carry natural gas from Russia to Europe, although the Nord Stream 2 pipeline was never activated.

German officials have not yet provided any information on the possible cause of the damage. However, Berlin's Tagesspiegel newspaper cited German security circles saying that sabotage was strongly suspected. "Our imagination no longer allows for a scenario in which this is not a targeted attack," the newspaper quoted its source as saying.

Separately, Kremlin spokesman Dmitry Peskov said Russia was "extremely concerned" by the reports of damage and that no option, including sabotage, can be excluded at the moment.

While neither pipeline has been delivering supplies to Europe, both have still been filled with gas.

Why is no gas flowing from Russia?

Nord Stream 1 was carrying gas to Germany until earlier this month, but Russian energy giant Gazprom cut off the supply, claiming there was a need for urgent maintenance work to repair key components.

German officials have rejected state-owned Gazprom's explanation of technical problems, saying the stoppage is merely a power play in response to Western sanctions.

Gazprom began to cut supplies through Nord Stream 1 in mid-June, blaming a delay in the delivery of a turbine that had been sent to Canada for repair.

Germany has long been highly dependent on imports of fossil fuels from Russia to meet its energy needs but has been forced to look for new sources  since the war in Ukraine began.