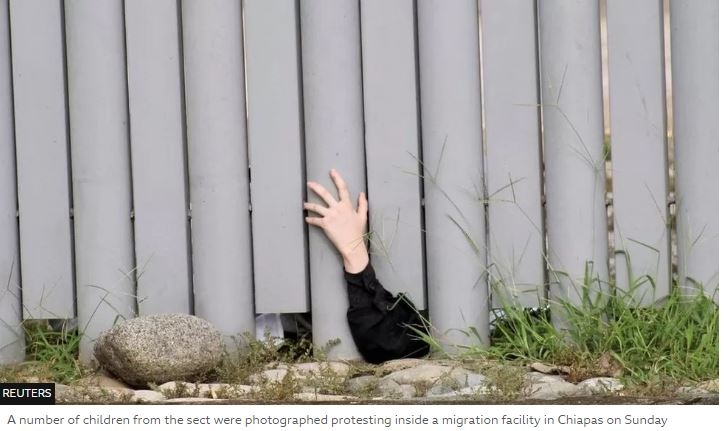 Children and older teenagers have been removed from the jungle compound of a Jewish sect in Mexico following a raid by police, the BBC has learned.

It took place against the Lev Tahor group, which was investigated on suspicion of trafficking minors.

The children and teenagers are being flown to Israel where they have extended families.

Lev Tahor (Hebrew for Pure Heart) is known for extremist practices and imposing a strict regime on members.

It advocates child marriage, inflicts harsh punishments for even minor transgressions and requires women and girls as young as three years old to completely cover up with robes. The stricture has earned the group the nickname the Jewish Taliban because of seeming similarities with the dress code enforced by the Sunni Muslim extremist group which controls Afghanistan.

On Friday morning, police made their way into the compound 11 miles (17.5km) north of Tapachula in Chiapas state.

A source connected to the operation said the boys and girls were quickly separated from the rest of the group due to fears their lives could be at risk from members trying to prevent them from being removed.

The Mexican police worked alongside a four-man volunteer team from Israel, including former Mossad agents, in planning and carrying out the operation. It was set in motion about two years ago when a relative in Israel of some of those in the group asked one of the former agents for help.

The team travelled between Israel and Guatemala, where the branch had lived since 2014, carrying out surveillance operations and working with local authorities, law enforcement and a Guatemalan private investigator. In January about 40-50 members illegally crossed into Mexico, where they continued to be tracked, settling in the jungle north of Tapachula.

The leadership in Guatemala has been at the centre of a kidnapping case since 2018, when two children who had been taken to New York by their mother who had fled the community were snatched back. They were recovered three weeks later in Mexico.

Nine of the sect's members were charged in connection with the case. Four - including the founder's son and current leader Nachman Helbrans - have been jailed, while one was convicted but freed due to time already served and another is due to be sentenced in November. Two are awaiting trial and one is in custody in Guatemala.

Lev Tahor was formed in Israel in 1988 by Rabbi Shlomo Helbrans, who later moved to the US. He served two years in prison after being convicted of kidnapping in 1994 and drowned in Mexico in 2017.

Numbering up to about 350 members, Lev Tahor has been forced to move from country to country in recent years after coming under scrutiny from local authorities. It is currently spread between Israel, the US, Macedonia, Morocco, Mexico and Guatemala. Between 70-80 members are still in Guatemala.

While the group is often described as ultra-Orthodox, it follows its own sets of rules and has been declared a "dangerous cult" by an Israeli court.

Its leaders have denied breaking local laws and say the group is being targeted because of its beliefs.