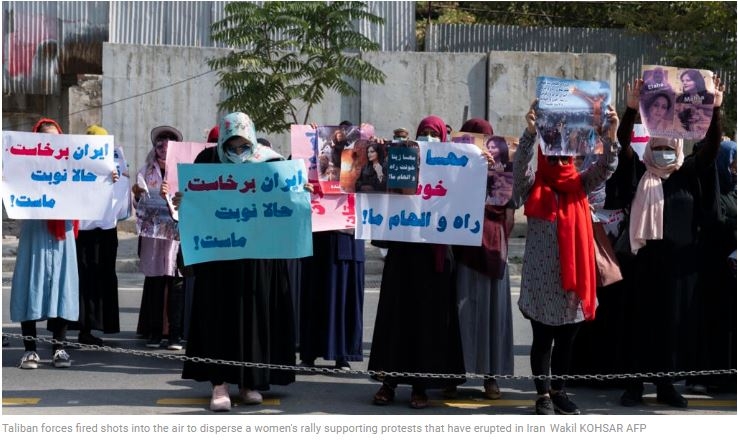 Taliban forces on Thursday used gunfire to disperse a women's rally in the Afghan capital supporting protests in Iran over the death of a woman in morality police custody.

Both Afghanistan and Iran are run by hardline Islamist governments that enforce strict dress codes on women.

Chanting the same "Women, life, freedom" mantra used in Iran, about 25 women protested in front of Kabul's Iranian embassy before Taliban forces fired into the air, an AFP correspondent reported.

In neighbouring Iran, dozens of people have been killed since demonstrations erupted over 22-year-old Mahsa Amini's death after she was arrested for allegedly breaching rules on hijabs and modest clothing.

On Thursday in Kabul, women in headscarves carried banners that read: "Iran has risen, now it's our turn!" and "From Kabul to Iran, say no to dictatorship!"

"We need to end these horrific governments," said a protester who did not reveal her name for security reasons.

"People here are also tired of the Taliban's crimes. We are sure that one day our people will rise in the same way as the Iranian people," she said.

Taliban forces swiftly snatched the banners and tore them in front of the protesters.

They also ordered some journalists to delete videos of the rally.

An organiser, speaking anonymously, told AFP the rally was staged "to show our support and solidarity with the people of Iran and the women victims of the Taliban in Afghanistan".

Protests staged by women in Afghanistan have become increasingly rare after the detention of core activists at the start of the year.

Like in Iran, women risk arrest, violence and stigma for taking part in demonstrations calling for their rights.

Since returning to power last year, the Taliban have issued a slew of restrictions controlling women's lives based on their interpretation of Islamic sharia law.

Many of the rules -- including dress code, segregation from men and travelling with a male guardian -- are monitored by the Taliban's vice and virtue police who roam the streets dressed in white.

Women must fully cover themselves in public, preferably with the all-encompassing burqa, according to the rules, which are enforced with varying rigour across the country.

The Taliban have also blocked girls from returning to secondary schools and barred women from many government jobs, although some senior Taliban are divided on the issue of education.

"If we want national unity then doors of educational institutions must be open for all," he said on live television.

The state of women's rights in Afghanistan remains a top concern for Western nations, with no country yet officially recognising the Taliban government.

Earlier this week, a United Nations report denounced the "severe restrictions" on women and called for them to be reversed.

"The international community has not and will not forget Afghan women and girls," the report said.