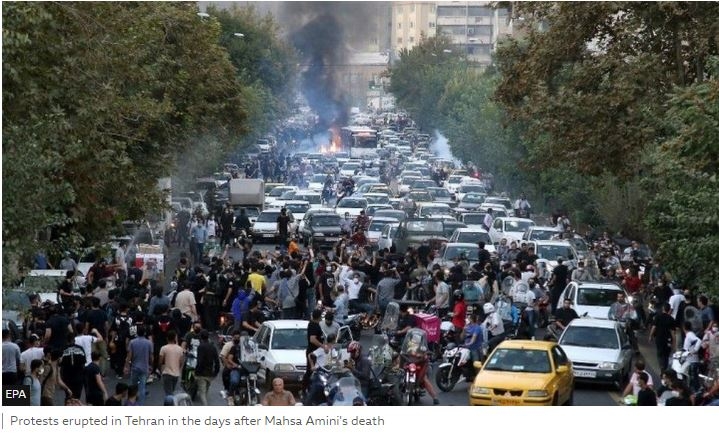 Nine European nationals have been arrested in Iran during deadly street protests sparked by a custody death.

Intelligence officers detained people deemed to be "agents of foreign spy organisations" either at protests or "behind the scenes", local media said.

The violence shows no sign of easing, with the death toll continuing to rise.

Protests erupted in the capital Tehran and spread through the country after Kurdish woman Mahsa Amini died having spent time in police custody.

The 22-year-old, from the north-western city of Saqez, was arrested in Tehran on 13 September by morality police officers for allegedly violating the strict law requiring women to cover their hair with a hijab, or headscarf.

Officers did not specify where the nine Europeans had been arrested, but gave 10 instances of what it said was involvement by foreigners and foreign-based opposition groups in the demonstrations.

Those detained are from Poland, Sweden, Germany, Italy, France and the Netherlands, Iran's intelligence ministry says.

The German, French, British and Swedish embassies were among those who were warned over the involvement of their "agents" in the anti-government protests, the ministry added.

It also claimed that before and during the protests, several other plots had taken place to either prepare for or coincide with the unrest, including cyber-attacks and the spread of "fake, pro-riot news" by non-state media such as BBC Persian and Iran International.

Ms Amini collapsed after being taken to a detention centre to be "educated" and died in hospital following three days in a coma. Her family believe she was beaten by officers but police insist she died after suffering sudden heart failure.

Iran is partly blaming "foreign enemies" for the chaos that has ensued, which has seen dozens killed.

In its latest estimate, posted to Twitter, the Norway-based group Iran Human Rights (IHR) said: "At least 83 people including children, are confirmed to have been killed in [the] #IranProtests."

Nineteen more people were reported to have died on Friday following a standoff between protesters and police at a police station in Zahedan, the provincial capital of the southeastern Sistan-Baluchistan province.

Among those dead was a Revolutionary Guards colonel, the AFP news agency reports, though it was not immediately clear whether the clashes were connected to the unrest sparked by Ms Amini's death.

Sistan-Baluchistan, which borders Afghanistan and Pakistan, is a flashpoint for clashes with drug smuggling gangs, as well as rebels from the Baluchi minority and Sunni Muslim extremist groups.

Earlier on Friday, state media reported that security forces had returned fire when a police station in Zahedan came under attack by gunmen.