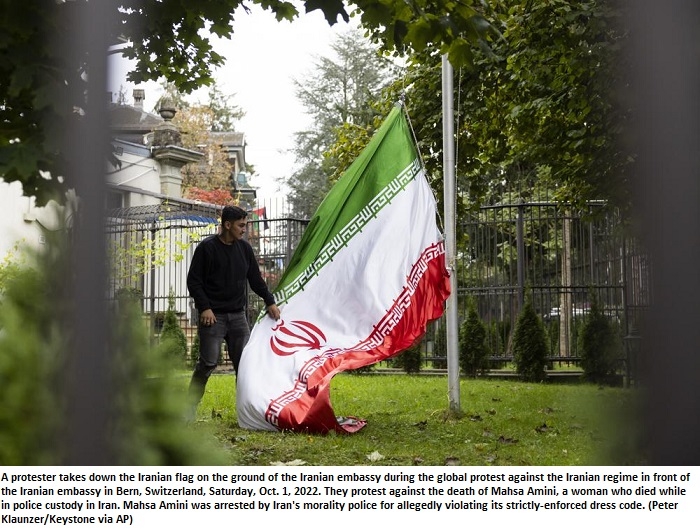 Swiss police used rubber bullets to disperse protesters in front of the Iranian Embassy in Bern after two men climbed over the embassy’s fence and pulled down the Iranian flag from a flag pole in the yard.

Police said late Saturday that nobody was injured and that the “large crowd” of protesters was dispersed after the use of rubber bullets The two protesters who entered the embassy’s premises were detained, according to police in the Swiss capital.

Police said they used rubber bullets after several other protesters at the unauthorized demonstration tried following the two men who had first entered the embassy’s yard and also tried accessing the premises.

It wasn’t immediately clear if more protesters were detained.

Thousands of Iranians have taken to the streets over the last two weeks in protests over the death of Mahsa Amini, a 22-year-old woman who had been detained by the morality police in the capital, Tehran, for allegedly wearing her mandatory Islamic headscarf too loosely.

Outside of Iran, thousands of protesters have also staged demonstrations in European countries and elsewhere over the death of Amini. They’ve also expressed anger over the treatment of women and wider repression in the Islamic Republic.