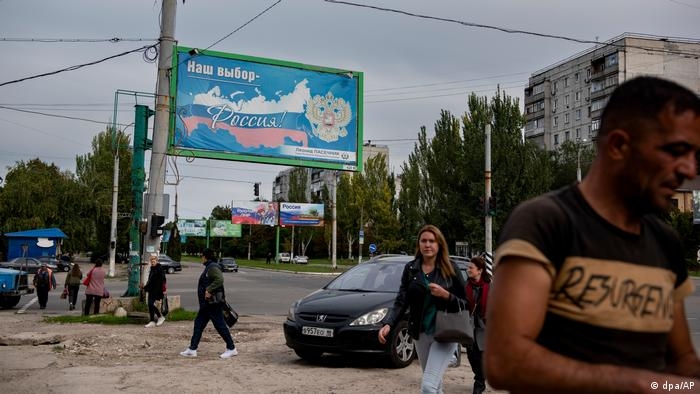 Russia has annexed large swathes of southern and eastern Ukraine, changing the lives of millions of people overnight. Will they accept the status quo, or resist?

In January 2016, Russian President Vladmir Putin told German tabloid Bild "to me, borders and state territories are not important, but the fate of people is." The newspaper interview focused on the Crimean peninsula, which Russia had annexed in 2014.

Now, Putin has yet again forcefully altered Ukraine's state borders, annexing parts of Luhansk, Donetsk, Kherson, and Zaporizhzhia. After six months of Russian occupation, all four will be incorporated into the Russian Federation.

Moscow has threatened to use all means possible — including nuclear weapons — to defend these annexed regions. Ukraine and most other countries recognize neither the "referenda" carried out in the areas, which supposedly produced overwhelming support for joining Russia, nor the subsequent annexation.

But what will happen to the millions of Ukrainians who are living in these regions? How will their lives change?

It is not clear how many people are living in the annexed regions of Ukraine, though they are estimated to be in their millions. While all four areas were annexed simultaneously, they differ in many ways. Since 2014, hundreds of thousands of people, mostly young men, fled the Donbas, leaving the self-proclaimed "republics" and moving either to Russia or Kyiv-controlled parts of Ukraine. Those who remained behind were elderly, immobile or in support of pro-Russian separatism.

"For some, this will be a dream come true; there are always certain parts of the population who will collaborate," says Andreas Umland of the Stockholm Centre for Eastern European Studies (SCEEUS). There seem to be more pro-Russian people living in Ukraine's east than in the south, though exact figures are unavailable.

Some Donbas residents supported the annexation, fearing they could face trial should Ukraine regain control, says Serhiy Harmash, editor-in-chief of Ostrow, an online news outlet. The Donetsk native was a member of the TrilateralContact Group tasked with implementing the Minsk agreement. "These people will say they voted yes, because when Ukraine takes back control, they will have to flee, most likely to Russia," says Harmash. How many voted in favor of annexation for this reason is unclear.

Just as life in occupied Donbas has changed, so too have certain societal changes occurred in Ukraine's south and parts of Kherson and Zaporizhzhia since falling under Russian control six months ago. Hundreds of thousands have fled, but there are still many pro-Ukrainians among those who remained. This became apparent when locals staged pro-Ukraine rallies in the first weeks and months after the invasion. "In Kherson and the region of Zaporizhzhia, many hate Russia — but in Donetsk and Luhansk, people have had their heads filled with propaganda for the past eight years," says Harmash.

In 2014, when Crimea was annexed, two-thirds of the peninsula's population was comprised of ethnic Russians. The situation in Ukraine's east and south is different, as not even half of all people there are Russian. According to a 2001 census, most ethnic Russians lived in the regions of Donetsk and Luhansk, making up 40% of the population. The regions of Zaporizhzhia and Kherson are home to some 25% and 15% ethnic Russians, respectively.

At first glance, formal annexation into the Russian Federation will not change life in these regions, which have already been under de facto Russian control for half a year. A look to Crimea may, however, give a sense of what could be to come. Pro-Russian loyalists are likely to receive support, whereas dissidents will suffer negative consequences. Wages and pensions will most likely rise, and Russia will endeavor to repair wrecked infrastructure. On September 29, deputy administration head Sergey Kiriyenko said some 3.3 billion roubles (€58 million) would be made available for "support projects" in these territories.

Ukraine's laws, currency, telecoms providers, language and education system will be gradually supplanted by their Russian equivalents. One major goal will be to culturally Russify these regions, which the Kremlin regards as historically Russian.

Will there be partisan resistance?

Residents of the newly-annexed territories will have to decide between accepting the new situation, or resisting it, and thereby risking their lives. "These are difficult decisions to make, many will be desperate, because they cannot gage what will come next," says Andreas Umland of SCEEUS.

Nobody can say for certain how long Russia will remain in charge, and how soon Ukraine could retake these regions. There have been reports of crackdowns and arrests of people who sympathize with Kyiv, and even reports of torture. The case of Russian-annexed Crimea shows that such persecution can drag on for years.

Men living in annexed Ukraine will face a difficult future as some will be conscripted into the Russian army to fight against Ukrainian forces. Maybe the Kremlin hopes drafting locals will help thwart the danger of partisan resistance. So far, several attacks have been carried out on individuals who have collaborated with Russian occupiers in southern Ukraine. Serhiy Harmash, however, believes Ukrainian intelligence agencies, rather than partisans, are responsible for them. He does not expect the rise of a major guerilla movement, akin to World War II, when Ukraine saw fierce partisan resistance. "The partisan movements of today and of World War II are different, there is so much video and phone surveillance today, what we are seeing [in Ukraine] is the work of organized groups, led by intelligence agencies," says Harmash.

Russia will seek to test out the loyalty of its new subjects in eastern and southern Ukraine, for instance when it begins handing out Russian passports. This is what could be observed on Crimea and in the Donbas, where Russia took control many years ago.

However, observers do not expect a major resettlement of Russians to the newly annexed regions, as was the case with Crimea. The reason for this is that fighting still rages on. "There will be no return of former Donetsk residents from Russia, either, where they are needed as workers — besides there are no jobs in Donetsk, as major companies have been destroyed," says Harmash. "These territories will not be very attractive, and the Russians will be worried they will have to leave — it won't work," says Andreas Umland.

Will Yanukovych and Azarov return to Donetsk?

It also remains unclear who will govern these regions. Will Ukrainian locals take charge of the annexed areas, or administrators from Russia? So far, Russia has used local residents, and former members of the pro-Russian Party of Regions of former President Viktor Yanukovych, who fled to Russia in 2014.

Will Yanukovych, his former prime minister Mykola Azarov, and other former Ukrainian elites, who have since fled the country, return to Ukraine? While experts do not rule out this possibility, they doubt they will seize power. Harmash says that new elites have taken over, who are loath to surrender power. But Russian administrators may take over from Ukrainians, as Russian media outlets have already suggested. Indeed, this process is already underway in some areas.

This article was originally published in German.