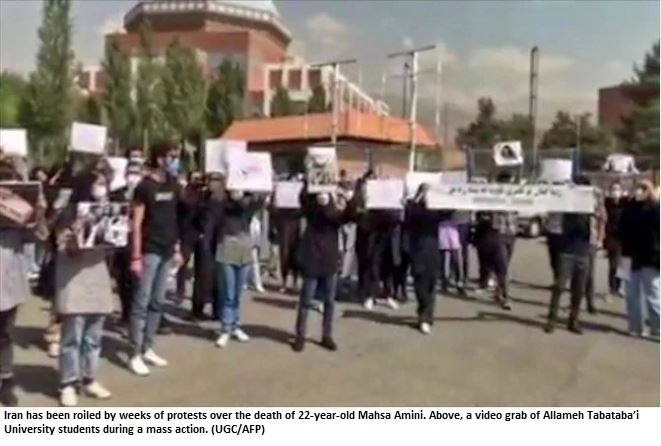 Iran on Thursday published video showing two detained French citizens purportedly confessing to acting on behalf of a French security service. The scenes were published amid ongoing protests roiling the country that Tehran has sought to describe as a foreign plot instead of local anger over the death of a 22-year-old detained by the country’s morality police.

Iran, which long has used detained Westerners as bargaining chips in negotiations, previously has offered no public evidence to support the spying accusations.

European Union lawmakers, meanwhile, adopted a resolution Thursday calling for sanctions against those responsible for the death of Mahsa Amini in the custody of Iran’s morality police, and Islamic Republic’s subsequent crackdown on antigovernment protests.

The resolution, adopted by show of hands, urges the 27-nation bloc to sanction Iranian officials and called for an investigation into Amini’s death.

“Parliament strongly condemns the widespread and disproportionate use of force by Iranian security forces against the crowds,” the resolution said in part. Lawmakers also demanded that Iran “immediately and unconditionally release and drop any charges against anyone who has been imprisoned solely for exercising their rights to freedom of expression, association and peaceful assembly, as well as all other human rights defenders.”

The outpouring of anger in Iran — largely led by young women and directed at the government’s male leadership — has created a seminal moment for the country, spurring some of the largest and boldest protests against the country’s Islamic leadership seen in years.

The clips out Thursday resembled other videos of Tehran has forced prisoners to make. In 2020, one report suggested authorities over the last decade had aired at least 355 coerced confessions.

The clips are part of what is described as a forthcoming documentary to air on Iranian state television that will accuse them of bringing cash to the country to stir dissent.

France did not immediately respond to the release of the video clips. However in May, the French government demanded their release and condemned “these baseless arrests.”

Their visit to Iran coincides with months of protests by teachers for higher wages in the country.

Any sanctions by the EU would fall under the bloc’s “Global Human Rights Sanctions Regime.” It was set up two years ago so the bloc can “target individuals, entities and bodies – including state and non-state actors – responsible for, involved in or associated with serious human rights violations and abuses worldwide.”

Other human rights violations or abuses can be included “if they are widespread, systematic or otherwise of serious concern.”

These measures usually consist of travel bans and asset freezes on officials accused of involvement in any suspect abuses or “entities,” like banks, companies, agencies or other organizations. It prevents EU citizens from making funds available to those listed.