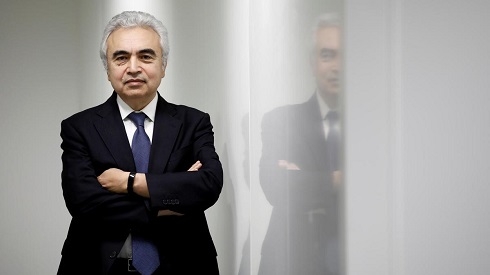 Fatih Birol, executive director of the International Energy Agency, believes Iraq can overcome its challenges through energy reforms and putting and improving its laws, which will attract investors and boost confidence.

The International Energy Agency’s executive director Fatih Birol says Iraq can end gas flaring, which is sapping its economy billions of dollars a year, within six to twelve months, if the political will is there.

“If there is determined action, it can be as quickly as six months to one year,” Dr Birol said in an exclusive interview with The National. “It cannot be completely finished but we can have achieved a lot of progress there”.

Dr Birol stressed the need to end gas flaring, which is costing Iraq both financially and environmentally. The World Bank estimates around 16 billion cubic metres of gas from Iraqi fields was flared in 2015, costing the economy billions in lost revenue. A 2018 study by Siemens estimated Iraq could save about $5.2 billion (Dh19.1bn) over four years by reducing gas flared from its fields.

“We need to stop gas flaring to generate electricity and Iraq needs to diversify its economy from oil and to develop its industry,” Dr Birol said. “Gas can be used to feed the industry sector, it can be food processing, ceramics, or other types of sectors which create jobs and diversify the economy … this is not rocket science. It has been proven and can be easily done”.

Ending flaring would also be in line with the World Bank’s global ‘Zero Routine Flaring by 2030’ initiative, which seeks to end the burning of about 140 billion cubic meters of natural gas annually world-wide, which contributes to climate change and leads to more than 300 million tons of CO2 to be emitted to the atmosphere.

In addition to Iraq’s dysfunctional gas sector the country is also vulnerable as a result of its reliance on gas imports from neighbouring Iran, which are more expensive than market rates and add to its financial woes.

Iran exports 1200-1500 megawatts of electricity to Iraq daily, in addition to 38 million cubic metres of natural gas, according to the Iran-Iraq Joint Chamber of Commerce. Last June, Iraq signed a two-year contract to continue the imports – despite American sanctions.

Ending gas flaring in Iraq was a topic of discussion at a virtual meeting held last week by the IEA and Iraq’s government along with the chronic issue of electricity shortages, that plague the country seventeen years after Saddam Hussein was deposed.

“I have initiated this meeting because I believe that Iraq is once again at a very critical time in its economic and political history,” Dr Birol said. “In fact (Iraq oil minister) Mr Ali Allawi said ‘the window of opportunity for Iraq is shrinking’ ”.

“What we need here is for the government to take the decision and many companies have said they are ready to come and fix this problem as they have done in other countries,” he added.

While ministers from Iraq, the US and UK attended the virtual meeting, its significance was elevated by the participation of the private sector with executives from Siemens, GE, Total, Eni, BP, Bechtel and Crescent Petroleum.

The main message from the private sector was “please do not delay decision making, because every day of delay costs money,” Dr Birol said.

The roundtable also heard from US energy secretary Dan Brouillette and the UK’s minister of state for business, energy and clean growth Kwasi Kwarteng and secretary-general of France's ministry of Europe and foreign affairs Francois Delattre.

While the meeting was closed to the media, a press release from the IEA quoted Mr Allawi saying “Iraq reforming its economy is not a matter for debate. It is essential, and it is vital that reforms are comprehensive and timely”.

The promise of reform is not new and successive Iraqi governments have made similar pledges.

Dr Birol is however hopeful. He believes there are reformers in the government of prime minister Mustafa AlKadhimi.

“I have worked with Iraqi governments for almost a decade. Despite the fact that the conditions are extremely difficult now, after talking with the PM and Mr Allawi, I am hopeful about the future of Iraq, although the challenges and risks are tremendous and multifaceted,” Dr Birol said.

The IEA’s most salient point is that “Iraq needs deep and urgent structural reforms”. In the absence of that, the country’s economic crisis will worsen.

“We believe a stable, secure and prosperous Iraq is in the interest of everybody in the region and the world, but more importantly, the Iraqi people after years of suffering deserve to have much better life,” Dr Birol said.

Iraq has previously estimated it needs as much as $100bn to overhaul its essential infrastructure, including its struggling power grid, which has led to widespread social discord and bloodshed.

The “most acute challenge facing Iraq is the need for investments. This is the most important one,” Dr Birol said. “Iraq’s economy is unfortunately almost exclusively relying on oil revenues and according to our numbers, (with the) current oil prices, all the revenues Iraq gets are enough to pay less than half of the employees in the government, leave aside the other half and the expenses for health, electricity, schools, infrastructure etc. Therefore, government doesn’t have the means to make investments alone”.

The country needs $10bn in investments over a four-year period to stop gas and electricity imports from Iran, according to S&P Global. With an economy teetering collapse the only way Iraq can hope to get the needed funds is from foreign investors or the private sector. But in the absence of a stable investment environment capital is a coward as the saying goes.

Companies that attended last week’s meeting “are ready to invest because they know that there is a very important opportunity for them to make good business but … they have to be reassured that there is an investment framework,” Dr Birol said.

That means having a legal structure to make the country attractive for investors, which includes honouring contracts, issuing visas, and facilitating entry into the country.

“These are not huge issues, they can be done easily, the issue is if they face political resistance inside of Iraq. This is the main issue. It is the reason we have this meeting, to help the hands of the reformists like Mr Ali Allawi,” Dr Birol said.

With the advancement of technology and rise of the shale industry the landscape makes it more difficult for Iraq to compete.

“To extract Iraq’s oil is easy, from a technical point of view, but the investment and security conditions are not easy,” Dr Birol said. “If the government of Iraq wants to really get private investment, it has to make sure it is attractive enough for investors …if energy companies come in and make investments, it will increase the confidence of investors in other parts of the economy”.

The Iraqi government is currently working on a white paper for energy sector reform, which is due to be released in three weeks, followed by a roadmap for implementation.

“It is up to the Iraqi government how they will implement those reforms. There are so many low hanging fruits. With firm and down to earth policy making, we can get very quick results within 6 months’ time and some of the issues can be easily dealt with,” Dr Birol said.

“We cannot solve all the problems but we may well see the first good results of the good intentions of the government and this will not only increase confidence of Iraqi people but also that of the international community and investors around the world”.