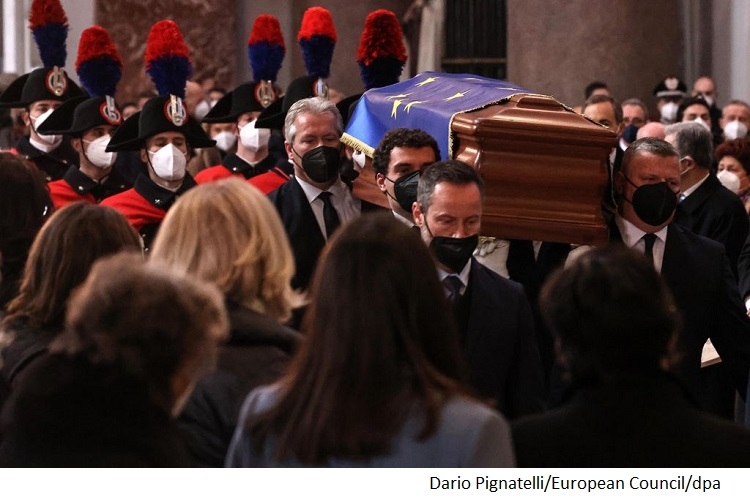 Sassoli died early on Tuesday at the age of 65 in the north-eastern Italian town of Aviano. He had been hospitalized on December 26 due to a complication with his immune system.

Politicians throughout Europe have paid their respects to the Italian Social Democrat, particularly praising his commitment to the European Union, and his strong stance on poverty and social injustice.

Sassoli's coffin was draped in the EU flag as it was carried into the church, trailed by Carabinieri military police officers dressed in ceremonial garb.

The bishop of Bologna, Cardinal Matteo Zuppi, presided over the ceremony. "We all keep his almost shy smile in our hearts," Zuppi said of Sassoli.

Sassoli was born in Florence and was a well-known journalist in Italy before becoming a European parliamentarian in 2009 as a member of Italy's Democratic Party. He was elected to chair the legislature in 2019, after serving as vice president.

His former role as a presenter of the main evening news on RAI public television means that Sassoli's face is quite well known in Italy.

According to a biography from Sassoli's political faction in the EU parliament, the centre-left politician was involved in his younger years in the Scouts and in Catholic youth movements.

Sassoli opened the EU assembly's premises as a woman's shelter for victims of violence and to provide meals to charities during the first Covid-19 infection wave of the pandemic.

He was critical of many EU members' migration policies and repeatedly advocated on behalf of migrants.

Sassoli was married and had two children.

On Thursday, Italian leaders paid their last respects as Sassoli as lay in state in a mortuary on Rome's Capitoline Hill.

The EU legislature is to hold its own memorial service on Monday, before electing a new president on Tuesday. An EU parliamentarian for Malta, Roberta Metsola from the centre-right European People's Party (EPP), is expected to succeed him.