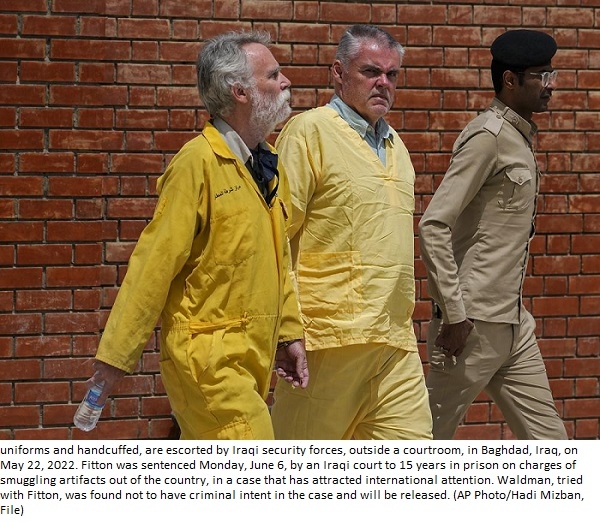 A British citizen was sentenced Monday by an Iraqi court to 15 years in prison on charges of attempting to smuggle artifacts out of the country, in a case that has attracted international attention.

The verdict handed down to retired geologist Jim Fitton, shocked the court in Baghdad, including his defense attorney. He and his family have argued that Fitton, 66, had no criminal intent.

“I thought the worst case scenario would be one year, with suspension,” Fitton’s lawyer Thair Soud, visibly shocked, told The Associated Press.

A German national tried with Fitton was found not to have had criminal intent in the case and will be released.

Judge Jabir Abd Jabir found that, according to the government’s investigation, Fitton had criminal intent to smuggle the artifacts that he had picked up and intended to transport them out of the country.

The trial has grabbed international attention at a time when Iraq seeks to open up its nascent tourism sector. The two men first appeared in court on May 15 wearing yellow detainees’ uniforms, telling judges they had not acted with criminal intent and had no idea they might have broken local laws.

Fitton said he “suspected” the items he collected were ancient fragments, but that “at the time I didn’t know about Iraqi laws,” or that taking the shards was not permitted. Fitton said as geologist he was in the habit of collecting such fragments as a hobby and had no intention to sell them.

In his defense, Soud said Fitton waited for weeks while in custody before hiring him as his legal counsel, arguing that this makes the point that the Briton had no idea of the severity of the case or the value of the goods found in his possession.

The judge, however, did not consider Soud’s arguments that laid out Fitton’s ignorance of Iraqi laws and the value of the items he picked up. Fitton and the German national, Volker Waldman, were arrested at Baghdad’s airport on March 20 after airport security discovered the items in their luggage. They had been part of a tourism expedition around the country’s ancient sites.

Their tour guide, also a British citizen who was in his 80s and in poor health, died in police custody for reasons unrelated to his detention. He was found with over 20 archeological fragments in this possession.

Fitton’s family grew worried when he did not arrive on a scheduled flight back to Kuala Lumpur, where he resides with his wife, on March 20. They later learned that Fitton, a well-traveled geologist for oil and gas companies, had been taken to an airport holding cell where he was still being detained, Fitton’s daughter Leila told the AP last month.

Fitton missed his daughter’s wedding in Malaysia, which took place in early May. Leila said at the time she was “heartbroken” by his absence.

Her hope for her father’s return home has been a near-daily fixture on her social media. Nineteen hours before Fitton was sentence she posted a photo of her parents to mark their wedding anniversary. In another, at a family hiking trip she wrote she hoped her father would be able to join them on the next venture.

Frustrated by perceived inaction on the part of the British Foreign Office to intervene and assist in Fitton’s case, his family started a petition that has garnered over 100,000 signatures. The British diplomatic mission in Baghdad has not commented on its involvement in the case and the British consul in Iraq, who attended the court session Monday, left following the sentencing without making any comments.

In total, 12 fragments of pottery and other shards were found in Fitton’s possession by Iraqi authorities, all of them collected as souvenirs, Fitton’s family says, during a group tourism expedition to Eridu, an ancient Mesopotamian site in what is now Dhi Qar province.

Waldman’s defense team has said the German tourist had been carrying two pieces for Fitton but that he did not pick them up from the site. Both men are charged with smuggling based on the country’s antiquities laws, and could potentially face the death penalty. However, officials have said that was only a remote possibility.

Soud said he intents to appeal the sentence immediately. It is not clear if Fitton can serve out his sentence in his home country as this would require a bilateral agreement between Iraq and the U.K.

Based on Iraqi law, both men could have faced the death penalty, an outcome that legal experts said from the beginning was unlikely.