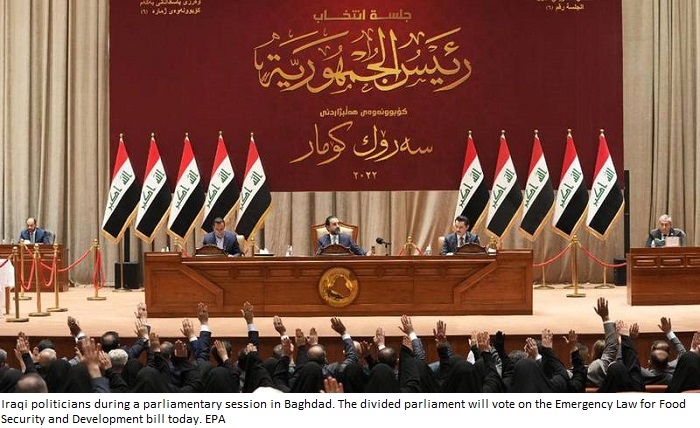 Iraq’s deeply divided parliament is set to vote on Wednesday on a food security bill that will allow the government to divert public funds to meet urgent needs.

The draft of the Emergency Law for Food Security and Development is expected to boost the country efforts to subsidise food and improve service provision, including in the power sector.

Since early this year, Prime Minister Mustafa Al Kadhimi's caretaker government has been pushing for the bill to be passed into law due to delays in the approval of the 2022 budget.

However, political wrangling over the formation of new government, about eight months since elections, has hindered the process.

The bill originally set aside 27 trillion Iraqi dinars ($18.5 billion) but that amount has since been reduced to 25tn dinars now, said legislator Sattar Al Attabi, who sits on the parliament’s financial committee.

The bill also calls for 6tn dinars to be allocated to the Ministry of Trade to buy wheat from local farmers and international markets, and keep the government-run food ration programme afloat, Mr Al Attabi said.

It also allocates 4tn dinars to the Ministry of Electricity to buy gas from Iran in a move expected to keep Iraq's power plants running as it struggles to meet growing demand this summer, he said.

Mr Al Attabi said 8tn dinars had been set aside for development projects across the country. However, such an amount would only provide a fraction of Iraq's expenditure on vital services.

Iraq's gas import bill in 2020 was thought to be as high as $8bn, according to the World Bank. That year, the former Iraqi government called for investment worth $15bn in the power sector in the near term.

With this year’s budget shelved, monthly spending has been limited to a twelfth of the 2021 budget. Last year's budget stood at 130tn dinars, with an estimated deficit of 28.7tn dinars.

The food security bill was originally submitted by the government but was rejected by the Federal Supreme Court last month.

The court ruled that the outgoing government had no authority to come up with bills to present to parliament or strike agreements that could influence Iraq's future.

After the ruling, the parliament’s financial committee proceeded to submit the bill — one of three options mentioned by the constitution when it comes to proposing draft laws.

By Sinan Mahmoud/ The National