‘We are homeless now’: Bulldozers raze rights of India’s Muslims 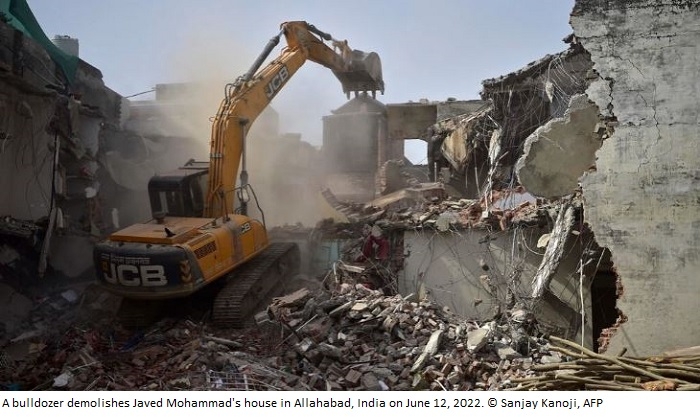 Indian authorities are in international damage control mode after controversial comments about the Prophet Mohammed by a senior ruling party official sparked a diplomatic spat. But inside the country, the home of a prominent Muslim family was demolished by the state in a display of majoritarian might against India’s largest minority community.

On Sunday afternoon, Mohammad Umam watched in fear and anguish as TV cameras covered the unfolding drama at his family home in the northern Indian state of Uttar Pradesh.

First, a massive deployment of police officers in camouflage vests and hardhats moved towards the house as news camera teams darted in and out of their ranks, recording and relaying the action live.

Next came the bulldozers. As the police kept journalists within recording distance but safely out of the way, a yellow bulldozer appeared at the gate of the family home, extended a mechanised arm toward the outer wall and tore it down before hacking into the two-story structure, cracking walls and twisting metal rods out of the way.

“It was all shattered within two hours. It was the only home we had. I watched it all live, the media was showing it live, they were helping the administration make the allegations. We are homeless now. Everything my Dad worked for was shattered in two hours. It was so painful, I don’t have words to explain,” said Umam, his voice breaking with the strain during a phone interview with FRANCE 24 a day after the demolition.

Umam, 30, hails from a prominent Muslim family in Prayagraj, a teeming city formerly known as Allahabad. His father, Javed Mohammad, is a businessman, activist and member of the Welfare Party of India, a Muslim opposition party in Uttar Pradesh, a state ruled by Prime Minister Narendra Modi’s Hindu nationalist Bharatiya Janata Party (BJP).

His sister, Afreen Fatima, made national headlines as a student leader in 2019, when protests against the Modi government’s controversial citizenship amendment law erupted across campuses in the capital, New Delhi. Fatima, now 24, has since graduated and is currently an activist and India-based research assistant at the Polis Project, a New York-based research and journalism organisation.

The latest allegations to hit the family are linked to insulting remarks about the Prophet Mohammed made by two ruling party officials in late May, sparking condemnations by several Gulf states, including Saudi Arabia, the UAE and Qatar.

In a cruel sequence of events emblematic of the discrimination plaguing India’s religious minorities, Islamophobic comments made by officials of a right-wing Hindu nationalist party led to the arrest of a Muslim politician and social worker, followed by the demolition of his home. The destruction was wrought by a bulldozer, an emerging symbol of the crushing might of a state shattering the rights of Muslims in a Hindu-majority nation.

Arrests in the dead of night

The Mohammad family’s misfortune began on Friday night, hours after police shot dead two protesters during street demonstrations across the country against the Islamophobic comments made by Nupur Sharma, a BJP spokeswoman, on an Indian TV station.

Sharma’s remarks, which insulted the Prophet Mohammed, sparked a diplomatic storm, with the governments of nearly 20 countries calling in their Indian envoys for an explanation. It forced the Indian government into swift damage control mode. Sharma, the familiar official voice of the BJP, was suspended last week along with another party official who tweeted her comments, which have since been deleted.

Protests nevertheless erupted on Friday in several Indian cities as well as in neighbouring Pakistan and Bangladesh in response to the remarks. In Uttar Pradesh, India’s most populous state governed by hardline Hindu monk and politician Yogi Adityanath, police arrested more than 200 people after the violent protests.

Shortly before 9pm on Friday, the police arrived at the Mohammad family home. “I was not at home,” recounted Umam, who works in another Indian city. “The police came to talk to my Dad. There were no charges, no warrant, nothing. They said they wanted to talk with my Dad, so he went with the police in his own vehicle.”

His father had not participated in the protests and had stayed home, posting messages calling for calm on social media, according to Umam. The police would later claim Mohammad was a “mastermind” of Friday’s violent protests. But on Friday night, after a day spent mostly indoors, the 57-year-old Muslim politician had no idea about the allegations that would be levelled against him, and so he duly complied with the police request to accompany them to the police station.

Hours later, at around 12:30am on Saturday, the police once again arrived at the family home to arrest Umam’s mother and youngest sister, 19-year-old Somaiya Fatima, in the dead of night.

His father remains in detention and has been placed on a list of 10 main “conspirators” of Friday’s violence, which include prominent Muslim activists and leftist politicians.

‘It was all illegal, and it was all so fast’

The family’s physical and emotional destruction was unleashed at a dizzying speed over the weekend, when courts are closed and access to legal injunctions and stay orders is difficult.

The morning after Mohammad’s arrest, Prayagraj’s police chief informed reporters that the activist-politician was the “mastermind” of the previous day’s violence. “Police will take action against gangsters,” said the city’s top police officer in Hindi, adding, “bulldozers will also be used on illegal constructions”.

Hours later – while Mohammad, his wife and daughter were still in detention – the police pasted a notice issued by the city’s development authority on the family’s home. The notice stated the construction of the two-story structure was illegal and it would be demolished the next day at 11am local time.

“They put the notice on Saturday night. It was the weekend, the courts were closed, there was no time to go to court. My Dad, mother and sister were detained, the main people were in custody. It was all illegal, and it was all so fast. My family members were all frightened, the police were coming every two or three hours, threatening us,” recounted Umam.

Terrified and in shock, the family had no time to recover their belongings before the bulldozers arrived on Sunday afternoon.

The official harassment of Muslims accused of crimes, followed by the demolition of their homes before the justice process can take its course, is a familiar pattern that has emerged in several Indian states and territories ruled by the BJP.

It is a strategy, many experts say, conceived by a right-wing politician who has embraced the symbolism of the bulldozer for electoral gains in a country gripped by populist Hindu nationalism.

The bulldozer made a spectacular entrée on the Indian political stage in the run-up to local elections in Uttar Pradesh, the country’s most populous state, considered a political launching pad for future prime ministers.

The stakes were high for Uttar Pradesh Chief Minister Adityanath as he campaigned for reelection early this year on a tough-on-crime platform, promising to “bulldoze thugs and mafias”. By the time the BJP swept the polls in March, Adityanath had earned the moniker “Baba Bulldozer” [Papa Bulldozer] as the construction tool became a ubiquitous feature at rallies, bearing candidates and supporters – some even buying plastic toy bulldozers for the occasion.

But it was not fun and games in Muslim neighbourhoods in BJP-ruled states.

As chief ministers of other BJP-controlled states got in on the Adityanath brand of populism, demolition squads went to work in the central Indian state of Madhya Pradesh. In April, for instance, authorities in Madhya Pradesh razed dozens of homes and shops in a Muslim neighbourhood a day after riots erupted when supporters of Hindutva – or a Hindu nation – held a provocative religious procession through the area.

Condemning the move, Rahul Gandhi, leader of the country’s largest Congress opposition party, tweeted an image of a bulldozer juxtaposed with a screenshot of the Indian constitution, declaring the state’s actions “a demolition of India’s constitutional values”.

Meanwhile in the capital, New Delhi, a series of demolitions ripped several areas, including Shaheen Bagh, the site of a peaceful 2019 sit-in, when mostly women demonstrated against a citizenship amendment law discriminating against Muslims.

'Collective punishment' for speaking out

The demolition drives tend to follow a pattern that Seema Chisti – a leading journalist and co-author of the book “Note by Note: The India Story (1947-2017)” – calls a “bulldozer moment” in Indian history.

Under politicians such as Adityanath, Chisti explains, “all points of contact between Hindus and Muslims – eating, love, burial, religious rights – are turned into moments of conflict requiring the implementation of justice”.

While there are no provisions under Indian law to demolish the home of anyone accused of a crime, a pattern of “extrajudicial” justice has emerged, where “the political power is the judge, prosecutor, executioner and implementor of the law,” according to Chisti.

“These are homes where several lives are lived. In India especially, it’s a space shared with the wife, children, grandparents, cousins…and so this is a form of collective punishment that goes against the standards of international law and Indian law,” she explained.

Gautam Bhatia, a scholar of Indian constitutional law, traced the pattern of a protest turning violent, followed by the police identifying individuals as masterminds. “Immediately after that, the municipality declares that these individuals are residing in unauthorised buildings,” he wrote in a post on the legal website Indian Constitutional Law and Philosophy.

Typically, Bhatia noted, “the time period between the police declaring that it has identified the masterminds behind the violence, the municipality declaring that the buildings are illegal, and the actual demolition, is under twenty-four hours.”

That’s precisely what happened to the Mohammad family over the weekend. The process was so swift, Umam explained, the family did not have the time to detail obvious discrepancies in the allegations before a court of law.

The house, Umam noted, was in his mother’s name, since it was part of her dowry from his maternal grandfather. “Our house was registered with the municipal corporation. We lived in the house for 20 years, we paid all the tax bills – property, water, electricity bills, everything. Suddenly they said it was an illegal structure,” he said.

The demolition notice, he explained, was issued in the wrong name, since his father did not own the property. City authorities also claimed the family had been given a notice on May 10, which the family denies.

A lawyer for the family has filed a case with the city high court, a time-consuming process that, in India, is an ex post facto phenomenon for families already rendered homeless and often helpless by the state.

The intent of the state authorities, according to Umam, is clear. “My Dad is a social activist who was helping poor people in impoverished areas. He had no criminal record and everyone knew him for his social activism,” he said. “They just wanted to defame him. They don’t want good leaders who help society. They do not want these people to have a voice, they want to silence them.”