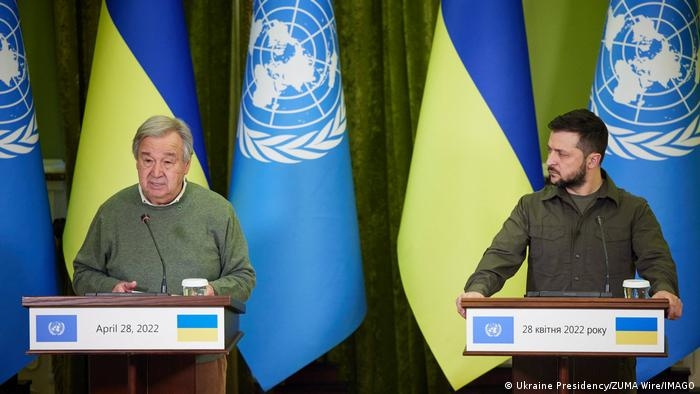 Antonio Guterres will meet Volodymyr Zelensky and Turkey's Recep Tayyip Erdogan in Lviv a day after NATO said it was "urgent" that the UN be allowed to inspect Ukraine's Zaporizhzhia nuclear power plant.

UN Secretary-General Antonio Guterres will meet Ukrainian President Volodymyr Zelenskyy and Turkish President Recep Tayyip Erdogan in Lviv on Thursday with grain exports, safety at the Zaporizhzhia nuclear power plant and sounding out options for a potential diplomatic solution to the war in Ukraine on the agenda.

In his daily address, Zelenskyy said Guterres had arrived and that the two would "work to get the necessary results for Ukraine."

UN deputy spokesman Farhan Haq said Guterres will discuss a variety of issues, including "overall efforts to do what he can
to essentially lower the temperature as much as possible with the various authorities."

Last month, Turkey and the UN helped broker an agreement clearing the way for Ukraine to export 22 million metric tons of corn and other grain stuck in its Black Sea ports since Russia began its invasion on February 24.

Nuclear plant concerns
The meeting comes a day after the head of NATO said it was "urgent" that the UN's atomic watchdog be allowed to inspect Ukraine's Zaporizhzhia nuclear power plant.

The plant, Europe's largest nuclear power station, has been under Russian control, which has sparked concerns about a possible nuclear accident should fighting occur there.