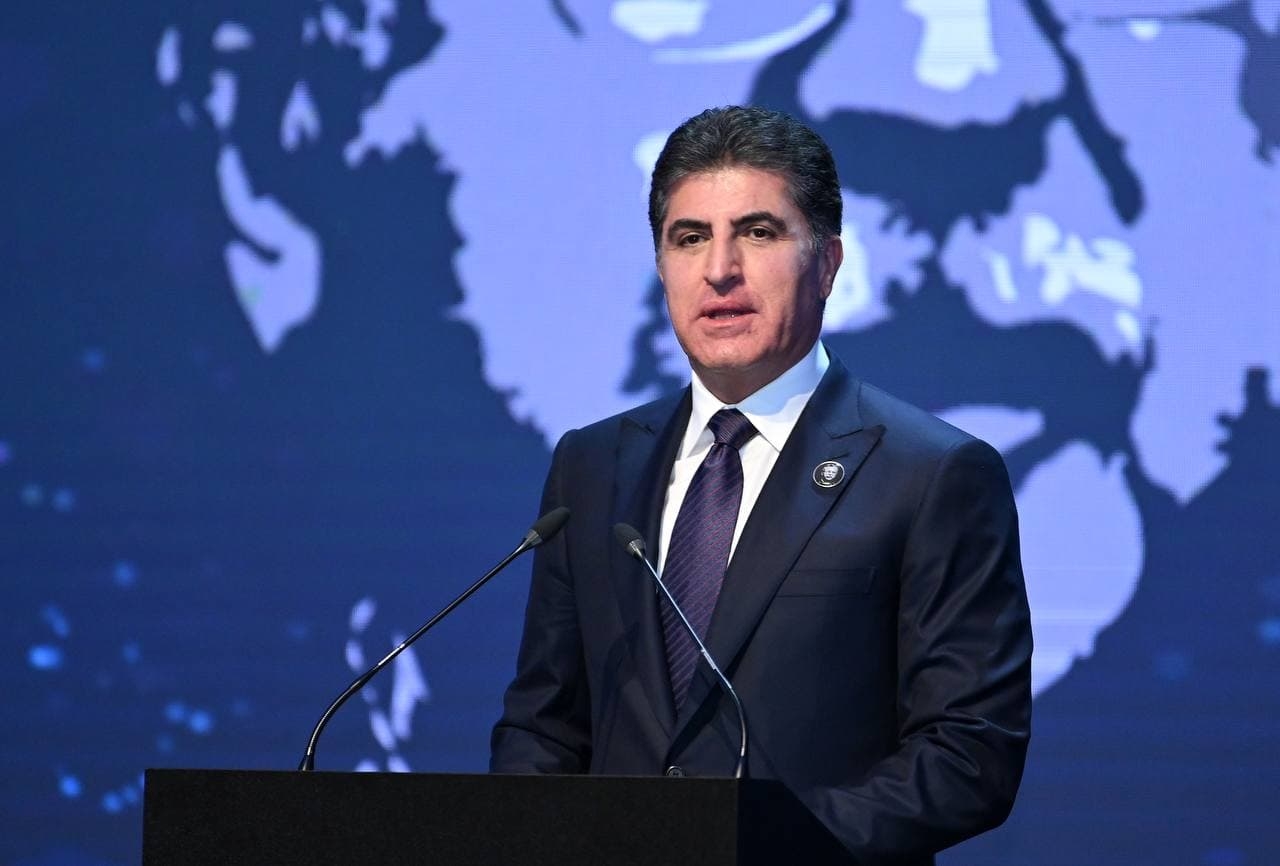 The following is a readout of the speech delivered by President Nechirvan Barzani:

Distinguished Guests,
Ladies and Gentlemen,
Good afternoon and welcome all.

Today, October 3rd, on the anniversary of the passing of Mam Jalal, we pay tribute to his soul and honor his memory. It is true that a few years have passed since Mam Jalal bade farewell for the last time, but throughout these years and after his deteriorating health prevented him from continuing his political duties, we have always felt the void that Mam Jalal has left.

On this anniversary, I pay tribute to Mam Jalal, and I send my best regards to his companion, his comrade and wife, Ms. Hero. I hope she is in good health and I wish her a long life.

Dear honorable guests,
I am glad that the “President Mam Jalal Foundation” is being announced today. I would like to thank the founding board of this institution and I wish its managers and directors success.

Mam Jalal’s history is a crucial part of the modern history of the liberation movement in Kurdistan. It is important to have an institution which shows his struggle. Having an institution to introduce current and future generations to President Mam Jalal’s struggle is necessary.

I hope the work of this institution will be carried out successfully. Mam Jalal put great energy and effort into journalism, supported Kurdish publications and the Kurdish cultural work; I hope this institution becomes an extended pathway of Mam Jalal’s route.

Ladies and Gentlemen,
I met Mam Jalal during the days of creating peace and consensus, and therefore for me, more than anything else, he was a great leader of preserving peace and collective work.

On November 8, 1986, the late Mam Jalal and my late father, signed the reconciliation agreement between the Kurdistan Democratic Party (KDP) and the Patriotic Union of Kurdistan (PUK). That day, I accompanied my father to the meeting. It was a very historic day for the people of Kurdistan.

On that day, I saw Mam Jalal for the first time. Up until his health deteriorated and passed away, a good and respectful relation continued between us. His soul returned to the God Almighty, but his love and respect will always remain with us.

That agreement of 1986, later led to a grand reconciliation among all parties of Iraqi Kurdistan, ended the civil war, and resulted in the formation of the Kurdistani Front.

After the civil war erupted in 1994, President Mam Jalal’s desire for peace and H.E President Barzani’s belief in peace resulted in them signing the reconciliation agreement in 1998 in Washington. This became a new stage of peace and a phase full of constitutional and political achievements being recorded for the people of Kurdistan.

Many achievements were made for the people of Kurdistan; all of which were obtained because of President Mam Jalal and President Masoud Barzani working together. Mam Jalal did his utmost to support Kak Masoud, and Kak Masoud never failed to support Mam Jalal.

When the post of the Iraqi Presidency was at stake (which according to the constitution should be assigned to a Kurd), President Masoud Barzani did not give in to the pressure of the US president and regional pressures in 2010 and Mam Jalal was reelected president.

This harmony of work was the order through many years; it brought stability and success for the people of Kurdistan, and therefore these years must truly be called ‘the golden years.’ During these years and because of this consensus and unity, Kurdistan experienced protracted growth, stability, progress, development, reconstruction and welfare, which all of Kurdistan took pride in.

Mam Jalal was very much concerned to preserve the existing consensus and solidarity. At many occasions he told me that if time went back, he would never allow differences to emerge between him and the late Mustafa Barzani. Later, he expressed this sentiment through public media and platforms as well. With firm conviction, Mam Jalal used to say that he had unilaterally decided not to become part of disputes or a civil war, no matter what the consequences and the cost would be.

Ladies and Gentlemen,
The unity of KDP and PUK and signing the Strategic Agreement between them by President Mam Jalal and President Masoud Barzani brought great achievements for the people of Kurdistan and led to peace and democracy in the country.

Unfortunately, some people and parties said at the time that the Strategic Agreement was suffocating democracy. But if we look at the post-agreement era between the KDP and the PUK, we realize that their assessment was not correct. Following the Strategic Agreement, many general and local elections followed, as well as many union and syndicate elections.

In the aftermath of the KDP-PUK Strategic Agreement, the conditions for the stability and progress of state and government institutions emerged; the environment for opposition groups in Kurdistan Region was formed; media freedom was broadened; fragmentation between the two administrations in Erbil and Sulaymaniyah eased; the conditions to unify national forces improved and collaboration between the security agencies widened.

All of these made the domestic unity stronger and led to a robust Kurdistan in Iraq and the wider region. At the same time, it rallied greater global support for the people of Kurdistan and their rights.

Indeed, the KDP and the PUK, as two main forces in Kurdistan Region and Iraq, once again need a new mutual agreement now according to the conditions of the period. An agreement between the KDP and the PUK, and unity and consensus between all communities of Kurdistan is very much needed to prevent further fragmentation of the decision making and political will of the people of Kurdistan.

Ladies and Gentlemen,
Mam Jala made the post of the Iraqi presidency strong and great, since he was a factor of solidarity for all the Iraqi forces, as he was a great defender of the Kurds, Shiites, Sunnis and all other communities. Mam Jalal’s office in Baghdad became a place to dampen disagreements and resolve disputes. With Mam Jalal’s departure from Bagdad, a great pillar of consensus was lost, and a main centre of political dialogue was absent, to the extent that even today the people and parties in Iraq are well aware of it.

As we come together on this occasion, we remember dialogues, talks and searching for an agreement. I am certain that all of you have now stronger will to conduct talks and resolve differences. Therefore, I ask you to come forward with initiatives and actions towards that noble objective. Do not see dialogue, initiatives and agreements as failure or concessions. Because the one who is engaged in dialogue and forms agreements is always a winner.

Similarly, today we need to come together and resolve the issues collectively with the same spirit. The Iraqi people are truly exhausted from the political disputes, since they know that as long as the disputes continue, public services will be incomplete and the stability and sovereignty of the country will be weak.

Ladies and Gentlemen,
As we mark this day, I remember many occasions with Mam Jalal. Often, when there was a dispute, Mam Jalal would say with his great humor: ‘Let’s have a chat.’ Thanks to God, those chats always led to achievements and averted disagreements.

Let us do the same today and decide to agree. Concession for the sake of agreement and for sake of the people is victory and is in no ways considered failure.

Tributes to the soul of Mam Jala and may he rest in peace. Welcome all again and thank you.