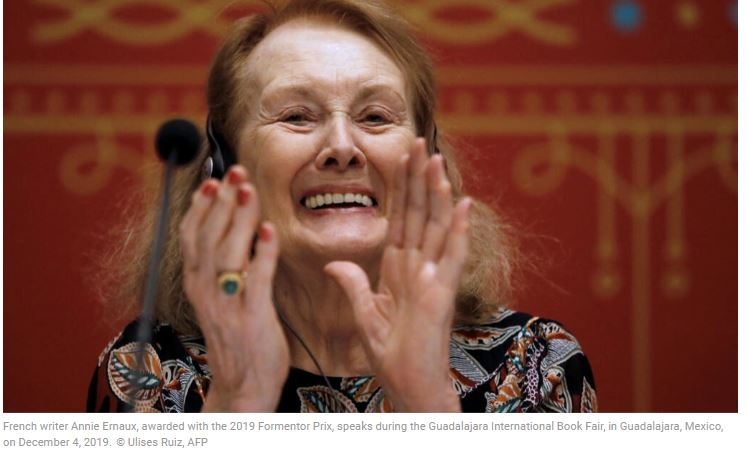 French author Annie Ernaux won the 2022 Nobel Prize for Literature "for the courage and clinical acuity with which she uncovers the roots, estrangements and collective restraints of personal memory", the award-giving body said on Thursday.

Ernaux, whose work is mostly autobiographical, is 82.

The prize is awarded by the Swedish Academy and is worth 10 million Swedish crowns ($914,704).

In explaining its choice, the Academy said Ernaux "consistently and from different angles, examines a life marked by strong disparities regarding gender, language and class".

Her debut novel was Les Armoires Vides in 1974 but she gained international recognition following the publication of "Les Années" in 2008, translated into "The Years" in 2017.

"It is her most ambitious project, which has given her an international reputation and a raft of followers and literary disciples," the Academy said of that book.

"I consider this to be a great honour for me and at the same time a great responsibility, a responsibility given to me," Ernaux told Swedish public broadcaster SVT moments after the prize was announced.

The prizes for achievements in science, literature and peace were established in the will of Swedish chemist and engineer Alfred Nobel, whose invention of dynamite made him rich and famous, and have been awarded since 1901.

While many previous literature winners were already widely read before landing the prize, the award generates huge media attention and can catapult lesser known authors to global fame while spurring book sales even for literary superstars.

Some prizes have gone to writers from outside mainstream literary genres, including French philosopher Henri Bergson in 1927, British Prime Minister Winston Churchill in 1953 and American singer-songwriter Bob Dylan in 2016.

Accurately predicting the winner of the literature award is educated guesswork at best and favourites to win this year's prize included a string of authors who have been considered to be high in the running for years.

Rushdie was stabbed in New York state in August as he was preparing to deliver a lecture, sustaining serious injuries. Last year's prize, widely seen as the world's most prestigious literary award, was won by Tanzanian novelist Abdulrazak Gurnah.

(FRANCE 24 with REUTERS and AFP)