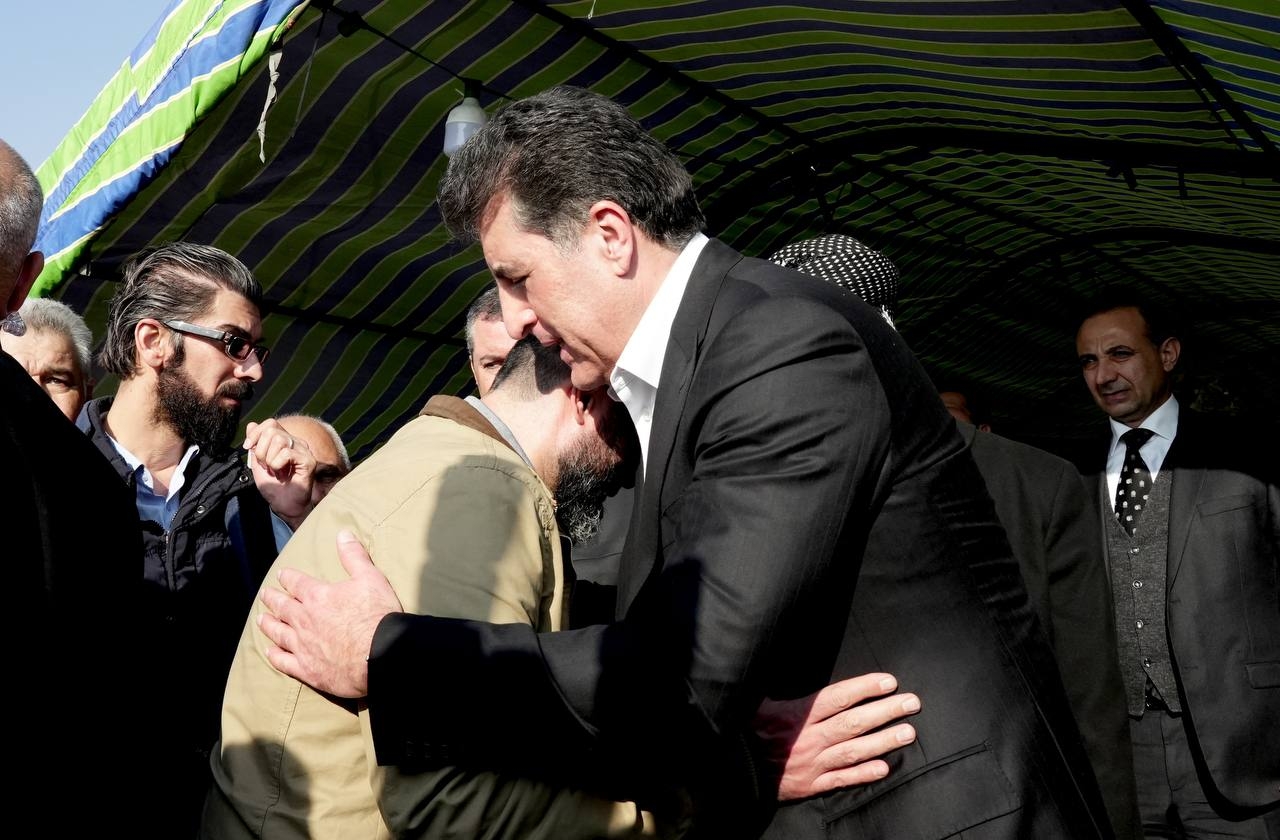 President Nechirvan Barzani participated on Saturday in Sulaymaniyah in the funeral ceremony of the victims of the liquid gas explosion in Sulaymaniyah city, in which 15 people lost their lives and a number of others were injured.

In the funeral ceremony, the President expressed his condolences and deep sympathy to the families of the victims and hoped that God Almighty blesses their souls and grants peace and comfort to their loved ones.

Later, the President visited the injured victims of the incident at the Shar Hospital. The President hoped for their recovery and expressed his readiness to offer full support for their speedy recovery.

Later in the day, in response to journalists, the President spoke about his visit to Sulaymaniyah and said, “Our visit to Sulaymaniyah is to express our condolences to the families and the loved ones of the victims of the incident that occurred. Indeed, it was a tragic event for all of Kurdistan, from Zakho to Khanaqin and all the other places of the Kurdistan Region, and also for people from within and outside the region. We are deeply saddened by what has happened and every family feels very close to the families of the victims.”

The President further said, “Today we came to Sulaymaniyah to express our condolences and we participated in the funeral ceremony with the Governor of Sulaymaniyah and we expressed our sympathies. It was a very tragic accident, and on this occasion, I want to thank the governor for what I heard today, which was his hard work and his feeling of responsibility; all of Shar Hospital doctors and staff members, security forces, the police, the municipality, and volunteering citizens have all done their duties extremely well.”

The President also said, “This incident has created a shared sentiment across Kurdistan, which is a pride for all of us to see how ready we are to help each other when such events occur. I thank each and every one who participated and helped out during such a hard time. I warmly hold their hands and thank them for this. We deeply express our sympathies with this family and we hope that the government investigates this case and finds out exactly what the source of this issue was and why this happened. Indeed, this must become a lesson to try and do what is needed to be done for more peace, security, and safety of the people.”

In response to a question regarding the decision of the President of the Patriotic Union of Kurdistan to compensate for the losses of this family and the cooperation of the President of the Kurdistan Region, he said, “We must all participate in this matter and do what we need to do for this family, and indeed, the government must also get to their duties. Any other sides, the leadership of any party, or any other people who would like to volunteer, we thank them and we would be grateful for that.”

“Indeed, it was an extremely saddening event. Today in Kurdistan, far from all the different responsibilities that we each have, we are all saddened by this tragic incident. We felt responsible to visit them and see them closely, and indeed, we will do whatever is required for them.”

In response to another question regarding the energy resources issue, and the final decision of the President of the Kurdistan Region regarding elections and when it will take place, President Nechirvan Barzani said, “It is a matter of safety. Indeed, the government will investigate this incident and will take the required steps to further protect the safety of citizens, because the duty of the government is to provide services to the citizens of the Kurdistan Region. So, of course, the government will do whatever that is needed to be done in changing the law or instructions and whatever else that is necessary,” the President said.

In response to another question regarding solving the issues among the political parties, especially those between the KDP and PUK, President Nechirvan Barzani said, “Indeed, we cannot achieve anything for this country and for this region without being united, without agreeing, and without having one shared voice. Our only condition for success is having a united voice. We are different parties and different parties have different opinions and we should not say that we must all think alike.”

The President also said, “What is important is that there is one issue that must be prioritized by all, and that is the interest of the Kurdistan Region. I believe that we can solve the problems and if we look at the statement of the Central Committee of the Kurdistan Democratic Party after the congress, we can see they stated that they will open a new front, start negotiations, and visit all the parties to begin serious efforts to solve all the problems through dialogue. Indeed, we will visit the PUK and the other political parties.”

Solar power station to be built in Erbil