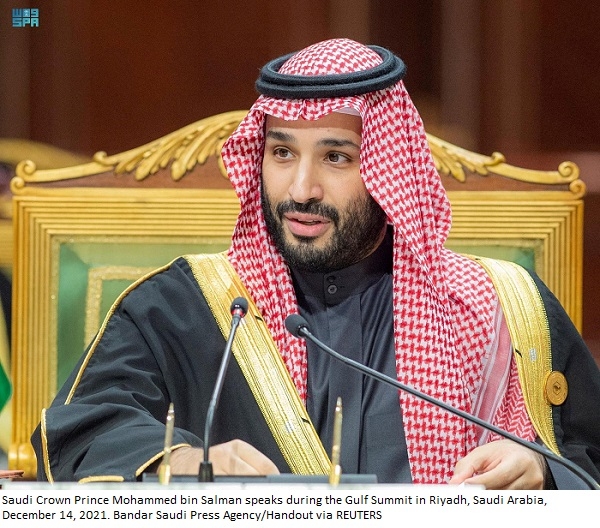 An unlikely royal joined a Saudi delegation to the UAE this week, and readers of the Kingdom's political landscape are viewing the move as a message of family unity from its de facto ruler after fractious years spent building his power base.

Prince Abdulaziz bin Ahmed is the eldest son of Prince Ahmed bin Abdulaziz, the detained brother of the Saudi monarch, and has no official post.

Known as MbS, Prince Mohammed had held off heading to the UAE until his father King Salman, 86, left hospital after a week-long stay that refocused Saudi watchers' and analysts' attention on issues of succession.

"Having the son of Prince Ahmed sitting next to him in Abu Dhabi is a strong message to local and international public opinions, especially with the succession looming," said one Saudi source familiar with the royal family's workings, declining to be named due to the sensitivity of the matter.

More broadly, the delegation represented a careful balancing by MbS of figures from different branches of the family, said Kristian Coates Ulrichsen, a political scientist at Rice University's Baker Institute in the United States.

"(This) perhaps was designed to demonstrate a show of unity within the Al Saud family that has been under strain from issues such as the detention of Prince Ahmed and Mohammed bin Nayef," he said.

The Saudi government did not respond to a request for comment on the delegation or signals its composition might have sent.

In a rapid ascent to power, Prince Mohammed has cracked down on perceived rivals and critics since replacing Mohammed bin Nayef (MbN), the king's nephew, as crown prince in a palace coup in 2017.

Having been endorsed by the Allegiance Council that same year, MbS's accession is automatic and not expected to be challenged. He is also defence minister and tightly controls state security services.

But diplomats have identified the March 2020 detentions of MbN and Prince Ahmed as a sore point between Riyadh and Washington, whose ties have been strained since the 2018 murder in the Saudi consulate in Istanbul of Saudi journalist Jamal Khashoggi.

Saudi authorities have not commented on the detentions, which several sources said at the time were on charges of treason and depicted as a preemptive effort to ensure compliance within the Al Saud family.

Before his detention, Prince Ahmed had kept a low profile since returning to Riyadh in October 2018 following a trip to London during which he appeared in online footage to criticize the Saudi leadership.

The Abu Dhabi trip was not the first time MbS has elevated relatives of royals previously out of favour, including those netted in an anti-corruption purge.

MbN was replaced as interior minister in 2017 by his nephew Abdulaziz bin Saud bin Nayef. In 2018, Prince Turki bin Talal was appointed deputy governor of Asir region as his brother Alwaleed bin Talal, detained during the purge, was negotiating a release settlement.

As he empowers younger royals in positions of authority, Prince Mohammad's actions also signal a definitive passing of the baton from the generation of King Salman and Prince Ahmed - surviving sons of King Abdulaziz, who founded modern Saudi Arabia and was followed by six offspring as monarchs.

"Mohammed bin Salman has been counterbalancing resentment from some senior members of the ruling family by courting younger princes," said Kristin Diwan, senior resident scholar at the Arab Gulf States Institute in Washington.