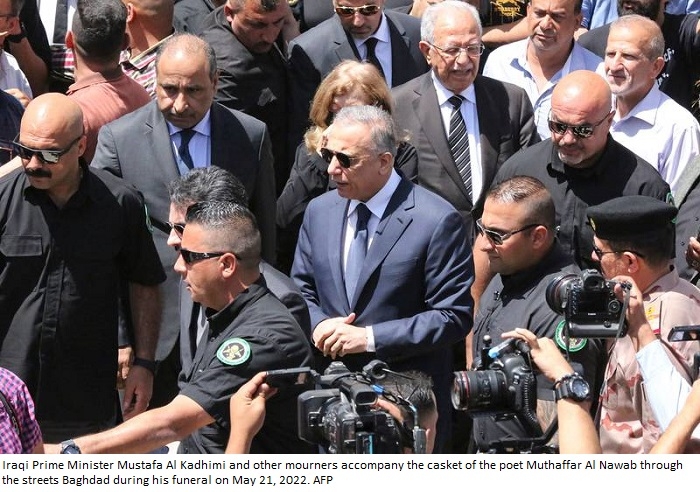 Al Nawab died a day earlier at the University Hospital Sharjah in the UAE after a prolonged illness. He was 88.

The funeral procession started peacefully at the Association of the Iraqi Writers in Baghdad’s Karrada neighbourhood after the wooden casket containing the poet's body arrived from the airport.

A few minutes later, some of the mourners started shouting slogans against the prime minister and Iraq's political elite.

Waving Iraqi flags and pumping their fists in the air, they shouted "The people want to bring down the regime," and "Oil is for the people not for the thieves."

The chaos forced the pallbearers to return Al Nawab's casket to the hearse and speed away with Mr Al Kadhimi's convoy.

Some of the mourners pelted the convoy with stones, bottles of water and shoes as it left.

Mr Al Kadhimi had ordered Al Nawab's body to be brought back to Iraq by presidential plane so that the poet could be laid to rest in his homeland. He went to the airport with other officials to receive the body.

Nicknamed the "revolutionary poet", Al Nawab gained most of his renown and notoriety for poems decrying corrupt regimes across the Arab world.

Born into an affluent family in Baghdad, he exhibited a talent for poetry from an early age.

He became a teacher after graduating from the University of Baghdad but his leftist political leanings — he joined the Iraqi Communist Party while in university — eventually led to his dismissal.

Amid a power struggle between nationalists and communists in the wake of Iraq's 1958 revolution, Al Nawab was arrested and sentenced to death — later commuted to life imprisonment — for a poem against the nationalist government.

He escaped prison by digging a tunnel along with other inmates and fled Iraq.

Al Nawab's life was one of constant movement, having lived in Syria, Egypt, Lebanon and Eritrea, as he continued to write and perform his work.

His funeral comes at a time of widespread anger against the political elites who have ruled Iraq since the 2003 US-led invasion ended the dictatorship of Saddam Hussein.

Mr Al Kadhimi, who took office in May 2020 after protests over poor public services, unemployment and corruption forced the resignation of the previous government, is serving in a caretaker capacity. Iraq's political groups have yet to agree on a new government following a general election in October last year.