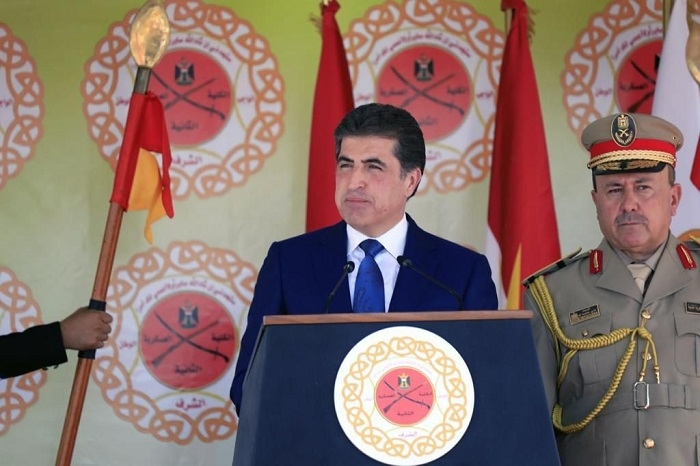 The following is a readout of President Nechirvan Barzani’s speech at the graduation ceremony of the 27th primary course of Zakho’s Military College:

Distinguished guests,
Our brave Peshmergas,
Commanders, teachers and trainers,
Dear graduates of the 27th primary course of Zakho’s Military College,
Families and relatives of the graduates,
Good day, and welcome all.

I welcome the representatives of coalition partners who supported us in the war against ISIS. We value their assistance and thank them. We welcome the diplomatic missions in Erbil.

A warm welcome to everyone.

I am pleased to be here in Zakho with you today, so that we can sincerely and together congratulate all the 499 graduates of the 27th primary course of Zakho’s Military College. I congratulate you, your parents and your loved ones. I wish you the best on this day of success. I wish you success in serving your country. I also like to extend a special congratulation to Eldad Abrim Yildekhani who is the only Christian student and graduate in this course. I hope in the future courses, we see a large number of Christians, Turkmen and a large number of Yezidi brothers and sisters.

I am pleased to see today that the graduates of this course are from all four provinces of the Kurdistan Region and other areas outside of Kurdistan. Participation of people from all regions in this course and their partnership on the same location is a factor that helps to unite Kurdistan’s Peshmerga forces.

I would like to thank the Ministry of Peshmerga for its continuous work for the success of this course, and the Iraqi Ministry of Defense for its assistance.

It is a pleasure to note that the Military College 2 of Zakho is one of the foremost in Iraq, and since its establishment in 1996, 56 basic and officer courses have been conducted in this college with many graduates.

The establishment, development and management of the Zakho Military College has always been at the centre of attention for President Masoud Barzani from its establishment and I thank him very much on behalf of you and myself. On this occasion, we pay tribute to his 60th anniversary as a Peshmarga for the just cause of Kurdistan.

Our brave Peshmarga,
My fellow citizens,

Today is May 26 and a sacred day in the history of revolutions in Kurdistan. May 26 is a commemoration of the resistance and resurgence of the Peshmerga struggle in Kurdistan during the hardest of times. We pay tribute to those who told the enemy that the Peshmerga shall not surrender and neither will Kurdistan. On this day, we remember these brave and compassionate Peshmargas and pay them respect after all these years. We pay tribute to all the heroes who rose up and started the revolution and the Peshmerga struggle that day.

We salute the souls of the heroes who sacrificed their lives for the survival of Kurdistan, the abolition of dictatorship and the establishment of freedom for the Kurdish people and all of Iraq. We pay tribute to the anniversary of both the May 26 Revolution and the New Revolution who rose up against oppression, championing freedom and emancipation of our nation.

I am very happy to be here on this day in Zakho, the resilient Zakho and the revolutionary Zakho. The people of Zakho played a major role in the September Revolution and the May Revolution in this region, and set the path towards victory. Because Zakho was a major center of the Peshmerga struggle, that is why this college was established here.

The Kurdistan Peshmerga force is Kurdistan’s defense force and part of the Iraqi defense system. However, during the ISIS war, it became a major force in the fight against ISIS and part of the international coalition to defeat ISIS, maintaining regional peace and freedom in the world.

Unfortunately, ISIS still exists and its attacks are increasing in some regions, especially in the disputes territories. These attacks of ISIS kill innocent people in these areas every day along with members of Peshmerga, the Hashd and the Iraqi army soldiers. The disputed areas have become bases and a corridor for ISIS terrorists and their recruitment which pose great threats to the Kurdistan Region and the whole of Iraq, as well as to the region and the world.

The increase in ISIS attacks and their daily threats to the lives of villages and towns in the conflict areas requires comprehensive cooperation from us. We must not underestimate the brutality and danger of ISIS, because ISIS committed a great massacre against our people and destroyed many areas and became a threat to Iraq, the Kurdistan Region and the whole world. ISIS still has the same ideology of killing and destruction. Therefore, increased cooperation between the Peshmerga and the army and the immediate establishment of two joint brigades of the army and the Peshmerga are essential in these areas.

So far, both the 1st and 2nd Support Forces, as well as 22 brigades of the 70th and 80th Forces have been placed under the Peshmerga Ministry, which is an important step. But it is not enough and all the Peshmerga forces must be united and all doors of party interference must be closed. The Kurdistan Region Presidency, as the commander-in-chief of the Peshmerga forces, is making every effort to unite the Peshmerga and fully supports the Ministry of Peshmerga in this regard. However, in order for all of us to succeed in this task and effort, party interference from all parties, especially from the PUK and KDP must end, as we surpass this challenging period and see to the Peshmarga forces of Kurdistan to unify and be faithful to their oath which is defending the Kurdistanis and Kurdistan.

For several years, the allied countries have been kindly planning to unite the Peshmerga, which is a great opportunity and support for the Peshmerga and the Kurdish people. People have been calling for the unification of the Kurdistan Peshmerga forces since the uprising. Now we can make this process a success with the help of the allies. The people of Kurdistan asks for the unification of Peshmarga Therefore, I call on the Kurdistan Parliament as the representative of the people to closely monitor this process of Peshmarga unification.

The Peshmerga, which was created for the Kurdish people and to protect Kurdistan, not for the party and to protect the party, is a golden opportunity to make the Peshmerga force a completely independent force free from party interference.

During our meetings in Sulaimani, we were very willing to sit down and resolve conflicts. The ground is now favorable for discussion and agreement. Yesterday’s meeting between the PUK and KDP went well. God willing, you will see a series of meetings. Hopefully we will arrive at a good agreement and will ensure the peace, stability and wellbeing of our people. It is very important that the Kurdish people support this direction and I assure you that there is no problem in the Kurdistan Region that we cannot solve by dialogue.

Tensions and instability in any part of Iraq affects the situation in all other parts of Iraq. Our interests and sovereignty as Iraqis are common in all regions. Together, we and the Peshmergas who graduated from this course and took the oath of office look forward to the stability and sovereignty of the whole of Iraq.

The high cost of living has made life difficult for all people in the world. The existence of political conflicts and political stalemate in Iraq has made the Iraqi people more vulnerable to this burden. Therefore, we must create a complete openness in the political process in Iraq by being very conciliatory towards each other. We are all Iraqis and part of Iraq, so we must all move towards resolving the issues in that spirit. We must all sit down together and find common solutions and end the division and intolerance, because this current stalemate is very dangerous for the whole of Iraq. It seems that this election has not created enough conditions to put aside some forces and blocs and make political decisions. In order to resolve the current stalemate, we must all sit down together for a common solution and stop attacking each other.

At the same time, I would like to call on the Iraqi Federal Government and all federal authorities and institutions in Iraq to look at the Kurdistan Region as partner and integral, because we are all one and share our successes and failures. Protection, the interests, and coexistence among all regions and communities of Iraq is the primary duty of the Iraqi government and federal institutions. The Iraqi people need peace and progress and do not want more problems. Therefore, Baghdad should not believe that depriving the Kurdistan Region is a good deed.

There is a bond of friendship and affection among Iraqi cities and the Kurdistan Region. The people of Mosul, Baghdad, Basra, Anbar, Kirkuk, Erbil and Sulaymaniyah have affection for each other. People have no problems with each other. People don’t like it and don’t want this to continue. I hope they will put an end to this issue and the problems between the Kurdistan Region and Baghdad will be resolved through dialogue and at the negotiating table as soon as possible.

I congratulate you all again and wish you success in serving Kurdistan. Be faithful to the oath you took to defend the holy land of Kurdistan. I welcome you all once again.

I wish you all a good day. Thank you so much.