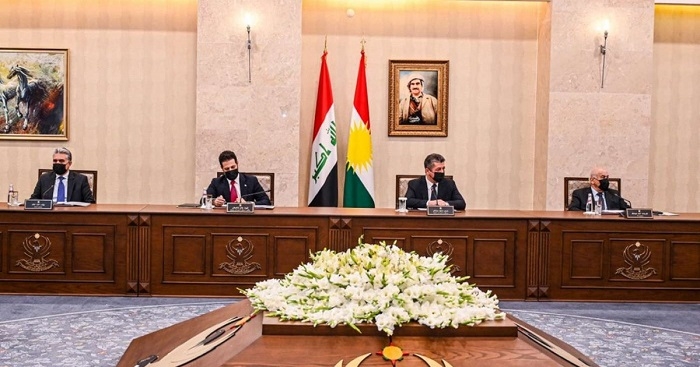 Opening the meeting, Prime Minister Barzani offered his condolences to the families of the the two professors who were killed in a gruesome attack on Tuesday. He stressed that he has tasked the Ministry of the Interior and security forces with taking the necessary measures against this crime and increasing their efforts against unregistered weapons, as well as the courts with speeding up the judicial process against criminals.

Prime Minister Barzani then addressed the multiple terrorist attacks on the people and infrastructure of the Kurdistan Region in the past few months. He noted that the goal of these attacks is to harm the Region’s resources and deter investment in the Region. As such, he tasked the Council and concerned institutions with carrying out their duties in protecting the Region’s key institutions.

The Prime Minister added that it is clear that the Federal Government, without any constitutional basis, has deprived the Region of its financial rights and, in 26 months, has only send a designated amount of 200 million dinars for 13 of them.

The Council called on the Federal Government and Ministry of Oil to cease their unjust pressure on the Region’s oil and gas industry. The Council commented that, as the Region is a federal state, they should support its prosperity and development instead of imposing pressure on it, adding that the KRG will continue to defend the Region’s constitutional rights.

Thereafter, Deputy Prime Minister Talabani noted that there is now detailed information available concerning the attacks on the Khor Mor gas field, and investigations have been made to take the necessary measures in response. He added that the attacks took place on areas of the field which are under development, rather than those already producing gas.

The Council then stressed the importance of cooperation with media outlets and providing them with information, but also requested responsibility and professionalism from the media in their coverage to avoid becoming a source of misinformation and fear, and a threat to national security.

Another topic of the meeting was an explanation of the draft of the Kurdistan Region Budget bill of 2022.

Relevant Ministries explained the reasons behind not sending the bill to Parliament. The Minister of Finance and Economy briefed the Council on a report addressing the Ministry’s efforts, alongside the Ministry of Planning, to put together the bill. The Minister noted that, as the Federal Budget will affect the Region and the Iraqi government is yet to enstate a budget law for this year, the Region’s bill must remain a draft for the time being. He stressed that a joint team from Erbil and Baghdad have audited the costs in the budget for the first time. The Council praised the Ministries’ work, stressed the importance of the budget law, and agreed to send a copy of the report to parliament.

Finally, the Council discussed the Ministry of Labor and Social Affairs’ suggestion of setting certain ministerial standards in order to provide equality in employment and work opportunities and prevent inequality. The Council tasked the Ministers with, using their authority within law No. 14 of the year 1991, providing equal employment opportunities.