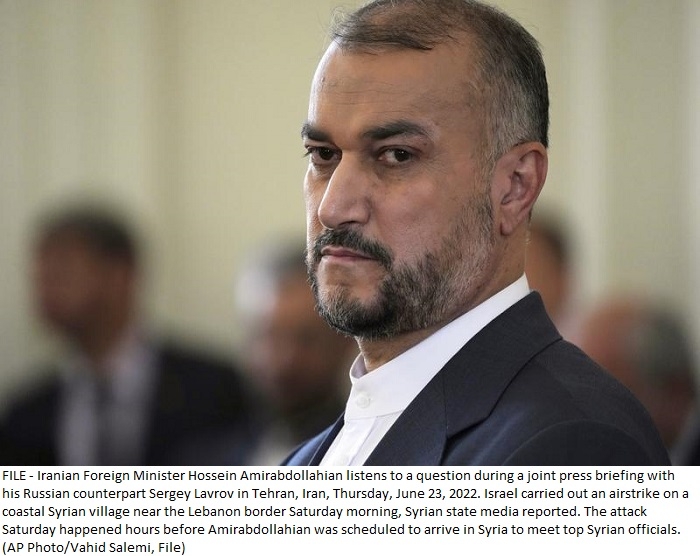 Iran’s foreign minister Saturday condemned an Israeli airstrike on Syria earlier in the day and said Tehran opposes any military operation by Turkey in Syria’s north.

Hossein Amirabdollahian made his comments at the start of a visit to the Syrian capital Damascus, where he was expected to discuss mutual relations and regional affairs with top Syrian officials.

Iran has been one of Syrian President Bashar Assad’s strongest backers, sending thousands of fighters from around the region to help his troops in Syria’s 11-year conflict. The war has killed hundreds of thousands and displaced half the country’s pre-war population of 23 million.

It also comes after Turkey’s President Recep Tayyip Erdogan has repeatedly said he’s planning a major military operation to create a 30-kilometer (19 mile) deep buffer zone inside Syria along Turkey’s border. He said he would do that by way of a cross-border incursion against U.S.-allied Syrian Kurdish fighters — an attempt that failed in 2019.

“We understand the concerns of our neighbor Turkey but we oppose any military measure in Syria,” Amirabdollahian said, adding that Iran is trying to solve the “misunderstanding between Turkey and Syria through dialogue.”

Analysts have said Erdogan is taking advantage of the war in Ukraine to push his own goals in Syria. Turkey agreed this week to lift its opposition to Sweden and Finland joining NATO, saying the Nordic nations had agreed to crack down on groups that Ankara deems national security threats, including the Kurdistan Workers’ Party, or PKK, and its Syrian extension.

Amirabdollahian blasted Israel saying that through its airstrikes it is trying to destabilize Syria and show that the country lacks security.

The Israel attack was the first since a June 10 airstrike on the international airport in the Syrian capital of Damascus caused significant damage to infrastructure and runways and rendered the main runway unusable. The airport was closed for two weeks and flights resumed on June 23.

State news agency SANA said Israeli warplanes flying over northern Lebanon fired missiles toward several chicken farms in the village of Hamidiyeh south of the coastal city of Tartus. The attack happened a few kilometers (miles) north of the border with Lebanon.

SANA said two people, including a woman, were wounded and there was material damage.

Israel has staged hundreds of strikes against targets in Syria over the years but rarely acknowledges or discusses such operations. Israel says it targets bases of Iran-allied militias, such as Hezbollah, which has fighters deployed in Syria fighting on the side of Assad’s government forces and ships arms believed to be bound for the militias.

The Damascus International Airport strike marked a major escalation in Israel’s campaign, further ratcheting up tensions between Israel on one side and Iran and its Lebanese ally, the militant Hezbollah group, on the other.