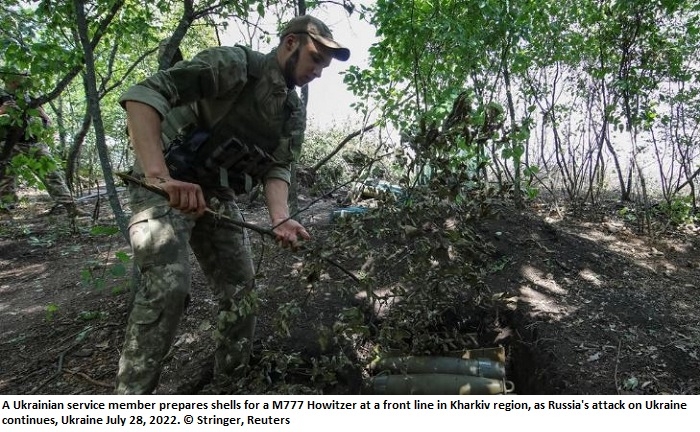 Ukraine's military denied on Friday Russian claims that it carried out an attack on a prison in separatist-held territory, which Russia's defence ministry said killed 40 Ukrainian prisoners of war on Friday – with Kyiv blaming the strike on Russian forces. The denial came as Russia gives the controversial private military firm Wagner Group responsibility for parts of the front line in eastern Ukraine as it faces a shortage of combat infantry, Britain's ministry of defence said in an intelligence update.

Germany's defence minister has decided to deliver 16 BIBER bridge-layer tanks – which have the ability to lay bridges – to Ukrainian forces, the ministry said on Friday.

"The BIBER will enable Ukrainian troops to cross waters or obstacles in combat," the ministry said in a statement. "The delivery of the first six systems will take place this year, starting in autumn. Ten more systems will follow next year."

Ukraine's military denied carrying out an attack on a prison in separatist-held territory that Russia's defence ministry said killed 40 Ukrainian prisoners of war on Friday, and blamed it on Russian forces.

"The armed forces of the Russian Federation carried out targeted artillery shelling of a correctional institution in the settlement of Olenivka, Donetsk oblast, where Ukrainian prisoners were also held," the General Staff of the Ukrainian Armed Forces said in a statement.

"In this way, the Russian occupiers pursued their criminal goals – to accuse Ukraine of committing 'war crimes', as well as to hide the torture of prisoners and executions..."

9:46am: Four killed in Russian attack on Ukrainian city of Mykolaiv

At least four people were killed and seven wounded in a Russian missile strike on the southeastern Ukrainian city of Mykolaiv on Friday, the regional governor said.

Vitaliy Kim, governor of the Mykolaiv region, said on the Telegram messaging app that at least some of the wounded had been near a public transport stop.

8:50am: Russia strikes northern Ukraine, including from Belarus

Russian forces launched a missile attack on the Kyiv area for the first time in weeks Thursday and struck the northern Chernihiv region, including with missiles fired from neighbouring Belarus.

Russia attacked the Kyiv region with six missiles launched from the Black Sea, hitting a military unit in the village of Liutizh on the outskirts of the capital, according to Oleksii Hromov, a senior official with Ukraine’s General Staff.

He said that the attack ruined one building and damaged two others, and that Ukrainian forces shot down one of the missiles in the town of Bucha.

Chernihiv regional Governor Vyacheslav Chaus reported that the Russians also fired missiles from the territory of Belarus at the village of Honcharivska. The Chernihiv oblast had not been targeted in weeks.

Russian troops withdrew from the Kyiv and Chernihiv regions months ago after failing to capture either.

6:37am: Russia's Wagner given responsibility for parts of frontline, UK says

Russian private military firm Wagner has likely been allocated responsibility for specific sectors of the front line in eastern Ukraine, possibly as Russia is facing a major shortage of combat infantry, Britain's Ministry of Defence said in an intelligence update on Friday.

"This is a significant change from the previous employment of the group since 2015, when it typically undertook missions distinct from overt, large-scale regular Russian military activity," Britain said in a regular intelligence bulletin on Twitter.

It also said that Wagner's forces are highly unlikely to be sufficient to make a significant difference in the trajectory of Russia's invasion of Ukraine.