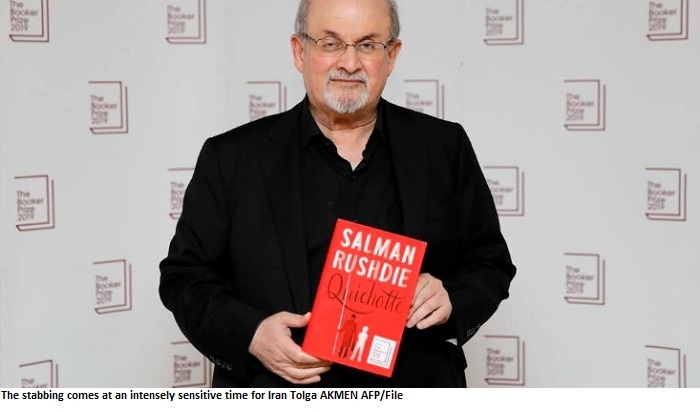 Iran's rulers bear responsibility for the attack against the British writer Salman Rushdie as the Islamic republic never repudiated a 1989 order issued by its founder calling for the novelist to be killed, activists and opponents charged Saturday.

While the fatwa issued by Ayatollah Ruhollah Khomeini over Rushdie's novel "The Satanic Verses" has for some time not been part of daily discourse in Iran, the clerical leadership under his successor Ayatollah Ali Khamenei also did nothing to indicate it no longer stood and on occasions underlined the decree was still valid.

The multiple stabbing of Rushdie at an event in New York comes at an intensely sensitive time for Iran, as it considers an offer by world powers to revive the 2015 deal on its nuclear programme which would ease sanctions that have battered the economy.

During a period of relative thaw between Tehran and the West under former president Mohammad Khatami, ex-foreign minister Kamal Kharazi had in 1998 pledged that Iran would not take steps to endanger the life of Rushdie, who for years was in hiding.

But an answer posted to a question on Khamenei's website Khamenei.ir in February 2017 said that the fatwa was still valid. "Answer: The decree is as Imam Khomeini issued," it said.

The @khamenei_ir Twitter account, which repeats Khamenei's views and activists have repeatedly said should be suspended, in 2019 posted that the fatwa was "solid and irrevocable".

Activists also insist that a bounty of over 3 million dollars for Rushdie's life offered by Iran's 15 Khordad Foundation remains on offer.

“Whether today's assassination attempt was ordered directly by Tehran or not, it is almost certainly the result of 30 years of the regime's incitement to violence against this celebrated author," said the Washington-based National Union for Democracy in Iran (NUFDI).

The National Council of Resistance of Iran (NCRI), an opposition group outlawed in Iran, said that the attack had taken place at the "instigation" of Khomeini's fatwa.

“Ali Khamenei and other leaders of the clerical regime had always vowed to implement this anti-Islamic fatwa in the past 34 years," it said in a statement.

New York state police identified the suspected attacker as Hadi Matar, 24, adding the motive for the stabbing remains unclear. He was detained in the immediate aftermath.

Commentators pointed to a Facebook account belonging to a man named Hadi Matar littered with images of the Iranian leadership which was deactivated in the hours after the attack. There was no immediate confirmation it belonged to the attacker.

A source close to the investigation told NBC news that Matar "is sympathetic to Shia extremism and Islamic Revolutionary Guard Corps (IRGC) causes" even if as yet there was no evidence of a definite link to the key Iranian security force.

"This is the real Islamic Republic; you negotiate with such a regime and allow its supporters and lobbyists into your society. Can you understand how we feel as this regime's hostages?" freedom of expression activist Hossein Ronaghi, one of the most outspoken critics of the leadership inside the country, tweeted in response to the attack.

Iran's actions are also under intense scrutiny in the United States where Tehran has in the last weeks faced accusations of seeking to assassinate former US national security advisor John Bolton and the US-based Iranian dissident Masih Alinejad.

The Islamic republic has a record throughout its history of seeking to eliminate opponents outside its borders and is now accused also of abducting foreign-based dissidents and hauling them back to Iran for trial and possible execution.

Alinejad, who was previously the target of a plot to abduct her from New York by speedboat back to Iran via Venezuela, is now in a safe house after a man with a AK-47 was found outside her residence.

In its news report about the attack, the official IRNA news agency described Rushdie as the "apostate author" of "The Satanic Verses" and recalled the fatwa.

The daily Kayhan, whose editor is appointed by Khamenei, hailed the attacker as "this courageous and duty-conscious man... who tore the neck of the enemy of God with a knife."

Iranian authorities have yet to make any official comment. Mohammad Marandi, an adviser to Iran's nuclear negotiating team, wrote on Twitter that while he would "won't be shedding tears" for Rushdie the timing was "odd" at a critical moment in the nuclear crisis.