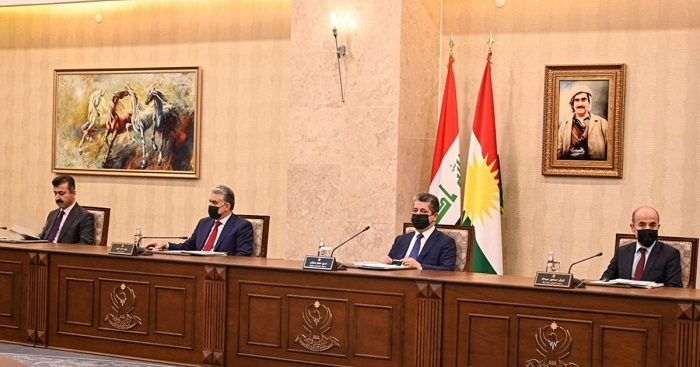 Opening the meeting, Prime Minister Barzani recounted his recent visit to Baghdad and the goal of his meetings with several Iraqi officials.

Prime Minister Barzani noted that the KRG delegation had conveyed the Kurdistan Region’s stance on all outstanding issues with a view to resolution on the basis of the Constitution, and that both sides had agreed to continue talks between the KRG Ministry of Natural Resources and the Iraqi Oil Ministry in order to reach an agreement that serves all Iraqis.

The Minister of Culture and Youth then briefed the Council on his recent visit to Armenia and meetings with the country’s officials.

Thereafter, the Minister of Peshmerga Affairs addressed the recent visit of a military delegation from the Kurdistan Region to the UK and the US. He reported that officials from both countries had stressed the importance of continuing the support to the Peshmerga forces.

Prime Minister Barzani praised these efforts and stressed the importance of continuing the reform process within the Ministry of Peshmerga Affairs.

The next portion of the meeting was dedicated to a report regarding the Iraqi Oil Ministry’s unlawful lawsuits against the Region’s oil and gas industry. The report outlined the constitutional basis that the Region has used to defend its rights. The Council reiterated its stance that the Kurdistan Region will continue dialogue with the Federal Government to find a constitutional solution to these outstanding issues.